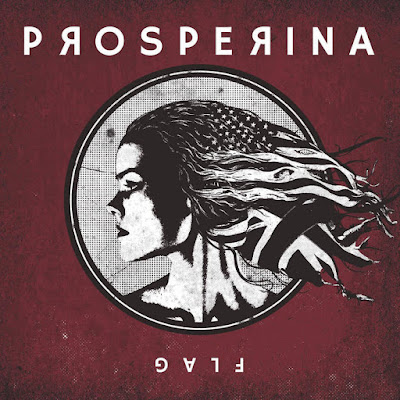 FLAG is the new album from Welsh Powerhouse Rockers Prosperina and their first album in almost 7 years. FLAG was meant to be released back in March 2019 but the band were one of the unfortunate victims of PledgeMusic. Money had been pledged by their fans for the making of this album and when that company went bust with all the money raised, Prosperina did the honourable thing and met their fans' pledge commitments and released this album. Perhaps at a huge financial cost to the band as well .So whilst my respect for Prosperina has never waivered, it has grown considerably for them with the release of FLAG.

Prosperina have always been a very hard band to describe. Parts Grunge, Stoner, Doom, Alternative and other Post-esque sounds that are currently flying about. Prosperina creates their own sound which blends ideas and sounds effortlessly from the last 35 years of Alternative Hard Rock and Metal. FLAG is an emotionally tight and quite involving album with powerful heavy grooves being Prosperina’s main weapon of choice. The album may have been recorded a few years ago but it’s an album for our times and shows how the world is pretty much “FUCKED'' at the moment whilst offering huge amounts of uplifting themes.

The opening songs of the album Deep Never, A New Cold and Art Nouveau bring a sludgy dynamic to Prosperina’s overall musical style and if you like your Grunge more Doom and Stoner based with a slightly “Alternative'' feel then the band have all bases covered. The album is more Psychedelic than I was expecting and I enjoyed how everything fits superbly well.

The dystopian attitude of the album sees Prosperina bring their most inventive style of Progressive Rock/Metal to the party but they never forget their “Grunge/Stoner Rock” roots and that’s no so more evident on the excellent 3 punch combo of - Drunk On The Blood Of Tokyo, Boot and Flag.

These 3 songs are where Prosperina excels the most on this album. Pitch-perfect vocals from lead vocalist Gethin, highly intelligent lyrics and sublime grooves that all have hidden meaning and depth to them.

The final two songs Runner In The Maze and Perhentian Storm contain the heaviest parts of the albums with the gloomy sounds and lyrics keeping with the “Dystopian” themes of the album. Though, the band’s Psychedelic/Post-Grunge grooves offer moments of uplifting energy along the way.

FLAG is an album with something to say and exceeds on all fronts delivering it’s perfectly timed messages but told through different and thrilling styles of Grunge, Alt-Rock, Stoner Rock and Post-Doom sounds.

Prosperina have delivered their best album to date and I hope this moves the band onto bigger and better things. As they deserve to be more widely acknowledged and known within the Stoner Rock/Metal scene.