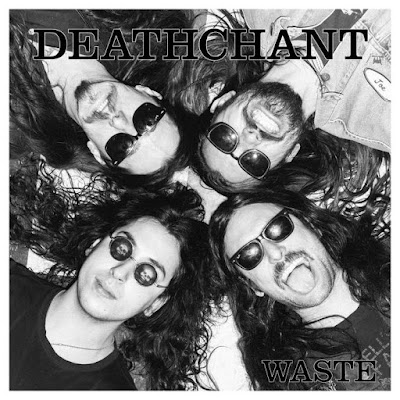 I first discovered Deathchant via one of my all the favorite indie metal and rock labels,King Volume Records. (Check them out, you will dig them) The band's self-titled debut was a blistering batch of doom rock loaded with tons of attitude. It's no surprise that California's supreme RidingEasy Records snagged these guys for their killer sophomore release, Waste.

The band's sound while familiar is uniquely their own. A combination of old school metal and rock with stoner rock and punk elements. I believe the boss man Steve mentioned Thin Lizzy in talking about the band and I wholeheartedly agree. The band takes Lizzy's groove, pushes the dual guitar drive to eleven, throws in some Motorhead spirit and whiplash speed with some living on the edge doom inflected lyrics.

Waste is a ripper from beginning to end. It's a breakneck pace with no pause and these guys don't bat an eye. Rails opens the album with some feedback before kicking in with it's driving thump that lets you know what's in store for you on this wild ass ride. Black Dirt follows with a heavier dose of metal. Holy Roller gives you just a moment to catch your breath before the band kicks you in the teeth with nothing but riffs and power and a heavy ass chorus. Gallows has the most Lizzy feel to it. The dual guitar assault and rhythmic delivery are stellar. The title track follows. Waste brings that Motorhead spirit and crams it down your throat like a handful of pills and a fifth of jack. Plague is a doom laden blast of righteousness. It slows things down, relatively speaking, but crushes beyond belief. Maker closes the record with unrelenting speed and heaviness. The track shows the band doesn't need any lyrics to blow your mind.

If you aren't familiar with the awesomeness that is Riding Easy Records and King Volume Records. Along with the uncompromising brilliance and swagger that is Deathchant. Now is the time to get your ass acquainted. Take your medicine and strap yourself in. You won't know where you're going and you'll have no clue where you've been, but you'll know you were on one hell of a ride! Dig on this!

Waste will be available to buy on CD/DD/Vinyl via RidingEasy Records from June 25th 2021.