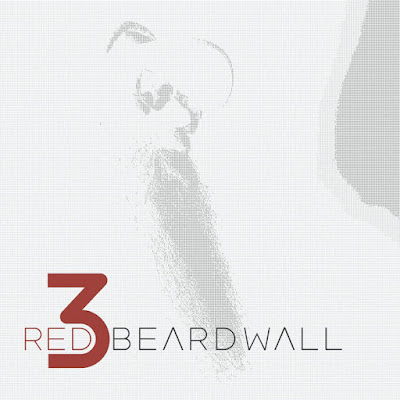 Sludge/Stoner Rockers Red Beard Wall return with their new full length album - 3 - with this being their third full length album overall. The band have left famed Italian Powerhouse Record Label Argonauta Records and signed to fellow upcoming acclaimed label - Desert Records. Red Beard Wall also has a new drummer this time round as well with Roderick Pink behind the drums. The band are still fronted by the ever-present and perhaps one of the coolest and friendliest musicians in the scene - Aaron Wall.

Aaron has built a fantastic reputation with his last couple of records and his super-friendly easy-going charm despite the heavy sludgy grooves he creates under his Red Beard Wall persona.

3 carries on the same addictive  charm as the previous Red Beard Wall albums but this one feels more personal. The album may not be as heavy as the previous records but this hasn’t stopped Red Beard Wall delivering a tour-de-force of Sludge/Stoner Metal that perfectly captures the rebellious spirit of the genre's rules but Aaron’s vocals and lyrics have a wonderful personal touch you don’t really hear much these days.

The opening two songs Tap and Move Forth show a more subdued Red Beard Wall but still carrying that “Doom-Pop” spirit you hear from bands such as Torche and Floor merged with 90s Grunge/Noise Rock stylish dynamics which give the band an extra layer of sludgy heaviness.

Aaron’s clean vocals and gruff growls are there to be heard and are perhaps one of the most consistently entertaining parts of this album. Aaron always puts his heart and soul into his music and none so more than on this record,

The heartfelt lyrics heard on songs such as Contrarian, My Brothers, Leave Be Me and Home leave you thinking of better times in today’s dark uncertain world. All of the songs on the album all have a beginning, middle and end which brings a high amount of Psychedelic Riff Heavy Moments to give your hearing a SONIC WORKOUT or even a more intense head-banging session.

The instrumental work is superb and it’s good seeing the band keep with their DIY PUNK ROCK ethics even on their 3rd album. They could have easily switched things up but you can tell this is a Red Beard Wall record through and through.

As I stated earlier in this review, this isn’t the heaviest album from Red Beard Wall but I’m happy to say it's the most complete record they’ve released to date. I admire the different Psychedelic and Noise Rock creative choices on this record and the song-writing has moved up a gear. So give this album a couple of spins before making your final verdict on this one. There’s a lot of hidden depth on this record and that’s why I appreciate this album a whole lot more.

Overall, 3 allows Red Beard Wall to try new and exciting different things which will broaden their appeal to a wider audience within the Sludge/Stoner Metal community.

Thanks to Red Beard Wall and Desert Records for the promo.

3 will be available to buy on CD/DD/Vinyl via Desert Records from July 02nd 2021.