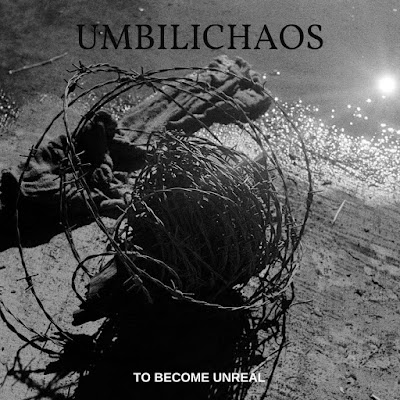 UMBILICHAOS is a one-woman Post-Hardcore/Doom/Psychedelic Act from a hugely talented individual called Anna C. Chaos. UMBILICHAOS have just released their 12th release overall with To Become Unreal. The EP features 25 minutes spread across 2 tracks which has a slow-burning narrative which allows Anna to fuise many different elements of Drone, Doom, Sludge, Psych and Hardcore grooves with an Experimental Distorted Shoegaze Narrative.

Perhaps influenced by bands such as Neurosis and Godflesh. To Become Unreal is a deeply emotional release which dictates its own style of music and can be quite sluggish and slow-paced at times. I mean that as a compliment. As the listener has more time to delve into the harsh Psychedelic themes and ideas UMBILICHAOS uses for their main storytelling device.

The production is excellent and is perhaps the strongest offering that UMBILICHAOS has released to date with some rich “Post-Metal” and “Shoegaze” methodology being used to great effect. The vocals are bang-on point and you can feel Anna’s frustration with the world and the growls providing a convincing argument against the excellent instrumental work contained with the EP.

My favourite song has to be the opening track To Become Unreal Pt 1. As it has that legendary “Post-Metal” sound made famous by Neurosis and Anna brings her own creative spin with a Psychedelic and Hardcore flair to that style of music.

Obviously this release isn’t going to be for everyone but UMBILICHAOS have been releasing better releases with each subsequent release and To Become Unreal is their most daring release yet. I’m waiting to hear what UMBILICHAOS has in store for their 13th release. Will it be LUCKY or UNLUCKY. Time will tell.

Until then, if you’re a fan of Distorted Guitars, Loud Gloomy Samples and Ferocious singing then To Become Unreal is worth checking out.