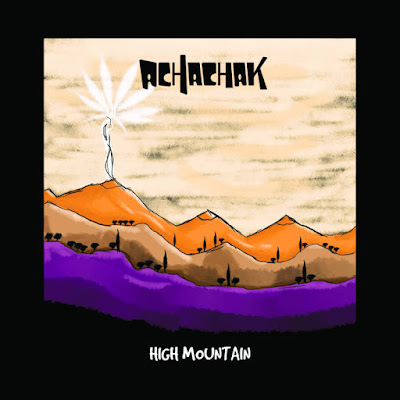 Achachak is a Croatian Stoner Rock/Metal band who bring a Psychedelic influence to their music along with traces of Doom Metal and Fuzz Rock. The band have been going since 1999 but their new album High Mountain has shown me what I’ve been missing. This is their 2nd album and the band have released a previous full length and 3 EP’s which I’ve listened to all recently. Though, I must admit High Mountain is the one that impressed me the most with Achachak playing a rip-roaring and adventurous style of Slavic Stoner Rock as they call it themselves.

There are shades of Kyuss, Electric Wizard and Black Sabbath on this release with Achachak portraying a dark and progressive style of Scorched Desert Rock. The 10 tracks on offer here show that Achachak do things differently and bring many different Psychedelic Beats and Noises to the record with interesting results though not all work but it’s good to see the band trying to stand on their own creative ideas.

Opening song - High Mountain is a fuzzy Stoner Metal odyssey with a few trippy and nightmarish sounds that appear towards the end of the song. The vocals are interesting and go through many different changes which suits the mood of the entire record. The music is most definitely FUZZY but DOOMS at the same blistering pace but you can tell there’s something sinister going on behind the scenes. A bit like KYUSS jamming with a more demonic version of Electric Wizard.

Second song - Lonewolf - runs with that theme with the perfect demonic mix of KYUSS/Electric Wizard riff based amplifier worship. The album becomes decidedly different on this track and the Desert Rock groove has turned into a more desolate experience. The music is played LOW and SLOW with Achachak playing a more frantic style of music. The distorted guitars are one of the best things about this song as everything comes together for a LOUD WALL of sludgy based grooves.

Third song - Mr Morning - continues with guitar noise based feedback and psychedelic drenched vocals turning this album into a more Doom Metal based one than Stoner Rock/Metal but don’t fret. As Achachak still brings elements of their Slavic Stoner Rock to the later stages of this song and album. The lyrics are wildly inventive and perhaps influenced by the WEEDIAN lifestyle. Lead vocalist Kodo feels positively inspired by Al Cisneros and James Hetfield for this song. I know that sounds bat-shit crazy but wait until you hear the song. The song has an epic Drone based feel which makes this one of my favourite songs on the album.

I wish I could do a song-by-song play review for this album but there’s 10 songs and I would be here all day. All I will say is that Achachak plays the same wild creativity on the opening 3 songs for the rest of the album and still finds time to add a Classic Hard Rock influence on other parts of the album.

Not everything works on this album but when Achachak get everything right then High Mountain is a thrilling Psychedelic Stoner Metal spectacle especially on songs such as: Maui Waui (Perhaps the best Brant Bjork song he’s never written), Bong Goddess, Mr SM (full of bone-crunching Doom based grooves) and the epic two-final song close off of Biggest Wave and Cozy Night.

High Mountain is an excellent and highly original album in places with Achachak showing a true passion and flair for the music they create and this is the type of album that will please both the Doom Metal and Stoner Metal crowds in equal measure.