Butcher In The Fog - Exonerate Me, Baby (Album Review) 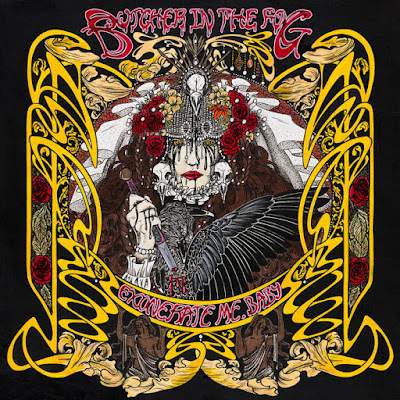 Exonerate Me, Baby is the new album from UK Doom/Sludge/Stoner Metal/Punk Upstarts - Butcher In The Fog. This is the guys 3rd release since their inception in 2011 and their first new material in over 4 years. The band live in their own violent and noisy FUCKED UP WORLD and Exonerate Me, Baby still allows casual listeners and their established fanbase to come in and enjoy the glorious THRASH based grooves going on.

The album never plays it’s safe as Butcher In The Fog have an aggressive rebellious streak within all their songs and the band are quite good at changing the mood and direction of the album with relevant ease and still leave you excited to hear more. Most of the songs such as: 3rd Strike (Fool’s Errand), Russian Bride and Swamp Of Delusion feel and sound like your standard Doom, Sludge and Stoner Metal Fare but it’s not until you delve further into their noisy backdrop of heavy guitars that you are treated to fantastic moments of Prog Metal with Psychedelic sounds and even some killer Motorhead inspired manic energy.

The longer tracks (Man Adrift and Auditory Hallucinations / Quicksand) are perhaps the best parts of the album for myself. As the band have more time on their side and they play a more adventurous style of music. Maybe not as aggressive as the other songs on the album but this is where Butcher In The Fog impressed myself the most whilst still bringing a Punk/Thrash Metal attitude to the mix.

Wayne Adams at Bear Bites Horse Studio is on Recording, Mixed and Mastering Duties once again which he handled for their last album and he does a stellar job bringing Butcher in The Fog thrilling and bombastic style of aggressive fuelled grooves to the masses.

Exonerate Me, Baby is wonderfully eccentric and free-flowing with many fantastic Doom, Sludge and Stoner Metal riffs that you would be a DAMN FOOL if you don’t listen to this album and give these guys a chance. Another killer release from Butcher In The Fog.

Thanks to Butcher In The Fog for the promo. Exonerate Me, Baby Is available to buy now on DD/Vinyl.