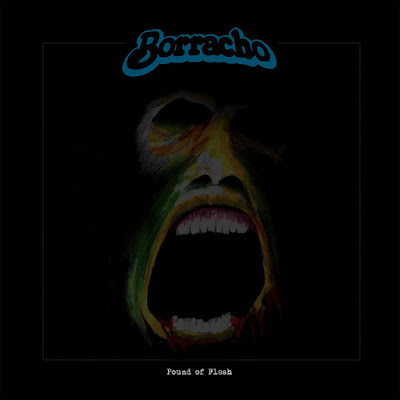 7.Year of the Swine

9.Foaming at the Mouth

Washington, DC based Stoner Rockers Borracho return with their 4th album Pound Of Flesh and they take aim at global politics in a big way this release. It may make for uncomfortable listening at times but Borracho, make sure you’ll take notice and listen. Though this done in such an addictive way with the band playing their nonstop style of Fuzz driven Psychedelic Stoner Metal with a funkier rhythm compared to their previous albums.

Borracho excel on all levels with this album with political commentary bang-on point but with the music keeping in with the rules of Desert Rock, Fuzz Rock and Psych Stoner Metal. The album clocks in at near 55 minutes and the album can be quite experimental. It may seem like your usual Borracho album but listen deep enough and the band change creative musical course with snippets of Blues Rock and Soul Music towards the end of the record.

The opening two tracks - Holy Roller and It Came From The Sky - are classic sounding Borracho grooves with political themes coming through. Most folks will be here for the music and Borracho doesn't disappoint with their flamboyant style of hard-hitting Stoner Metal grooves and boisterous vocals to match. There is a delicious FUZZ ROCK energy on this record not heard since their acclaimed debut album Splitting Sky.

Pound Of Flesh is the type of album that allows Borracho to pay respects to their own creative musical pasts whilst embracing a more aggressive stance but still writing fantastic songs that all have a lot to say. Take 3rd song Caravan for example. A song that perhaps falls into the Progressive Rock category and is more experimental that we’ve heard from the band. The vocals and lyrics are major highlights with Borracho still bringing an element of fun to their music.

The second half of the album is where Borracho go “off the range” and explore their more experimental side with touches of Blues Rock, Sound Effects and Soundclips being added. The following songs are perhaps some of the best material that Borracho have written to date: Dirty Money, Burning Down, Year Of The Swine and Foaming At The Mouth.

Some of it plays quite uncomfortable when you first listen to the album. I loved every twisted minute of this and it was good seeing Borracho being more daring with their music whilst offering memorable high quality Stoner grooves.

Is this their best album. That’s hard to say at this point but it’s up there with Atacama. Pound Of Flesh is a wonderfully made album. Top-notch production values which perhaps allow this album to be the best that Borracho have sounded to date.

What we do have here though is another “Album Of The Year” contender and Pound Of Flesh will no doubt end up with similar plaudits within the Stoner Metal community.

Thanks to Kozmik Artifactz for the promo.