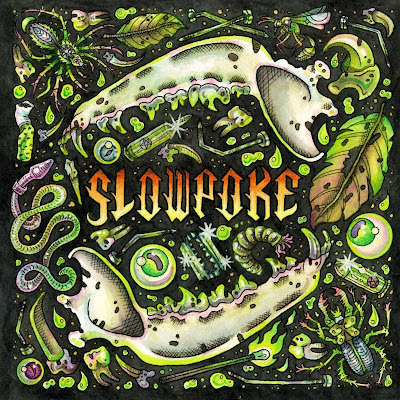 Slowpoke formed in St John's Newfoundland Canada in 2018 by Ben Chapman-Smith (Bass, Vocals) and Cameron Legge (Guitar). In early 2019 Adam Young (Drums) joined the band. The trio went on to record the bedrock of their upcoming album ‘Slowpoke” and closed the night at Still Heavy’s Midsummer Mayhem 3 festival and were dubbed the “hidden gem of the evening” by Tony Carew owner of Still Heavy.

COVID-19 made live performances a non-option in 2020 so Slowpoke went inside and worked away at their release, and applied for a MusicNL Artist development grant which they received in January 2021. Upon receiving the grant Slowpoke enlisted the services of Rick Hollet at Redhouse Recording (sHeavy, Hey Rosetta!) for Mixing and Chris Keffer at Magnetic North (The Black Keys, Cheap Trick) studios for Mastering. Slowpoke is currently performing in Newfoundland and has an album release show planned at the Rockhouse in St. Johns on August 21st 2021 with The Birchmen and local legends sHeavy.
Album Premiere
You can listen to the album with this cool exclusive album premiere below
The band say this about the album:
"We bequeath to thee, our first album! Thanks to the talents of Rick Hollett and Chris Keffer the end product is something far greater than the DIY project it started as. This entire process was a great learning experience and it’s already got us thinking about how we’re going to approach future material.
Anyway, check the album out! Our songs can be a bit of a trip but just lay back, strap in, and enjoy the ride. The album has some pretty sweet doom moments on it, lots of spicy riffs, some very salty lyrical content, a couple sour notes and some deep rich fuzzy Umami tones. Throw ‘em all in a pot, scream really loud into it frequently for 2 years and you’ve got Slowpoke. Bon Appetit."

Thanks to Keith at Infecting Cells PR for all of the details.
Outlaws Of The Sun at 16:53
Share
‹
›
Home
View web version