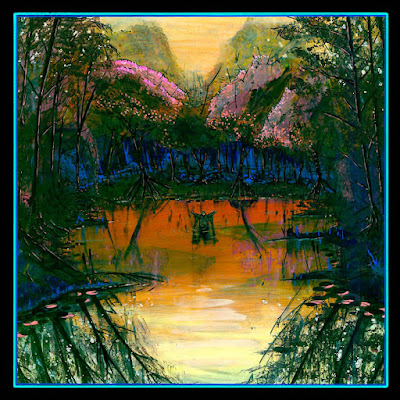 A Passage Divine is the 2nd full length album from Danish Psych Doom/Stoner Metallers Bogwife and follows on from their 2020 debut album. This album takes a more riff-centric approach compared to that album with Bogwife leaning heavily on the Psychedelic Heaviness with echoes of YOB and Slomatics for good measure. There is also a steady mix of Blues Rock and Hard Rock on this album but mostly this is an action-packed album full of many Stoner/Weedian Twists and Turns.

Opening track - The Approach - is a doomedelic journey into the layers of different Psychedelic areas of Doom and Stoner Metal with an almost “Drone” feel to everything. There is a seedy element to the album which gives the record a much needed classic sound whilst remaining modern at the same time. The music moves along at a slow pace with the vocals bringing a well balanced style of different themes and tones. The lyrics are superb which allows the music to breathe and play naturally.

Second song - Restoration - brings a “Sludge” environment which prompts the band to play some of the heaviest parts of the album. The vocals are slightly OTT in places but it works. As the music becomes more theatrical, you have to admire the influences of Black Sabbath and YOB working their way through on this track. The Space Rock flavour becomes an important building block for Bogwife to convert their heaviest grooves and sounds to a slightly more Progressive style of music.

Third track - Among The Trees - sees Bogwife in full flight with their Cosmic/Space Rock sonic based passages and the band simply excel at this style of music. The distorted and drone guitars allow Bogwife to become a more vengeful Doom Metal entity and you can see that change with the kick-ass vocals and soaring instrumental work that appears in the 2nd half of the song. Ambient/Psychedelic Sounds take over for a brief moment of time with Bogwife playing the best track on the album.

The final two songs - Celestial Dawn and Descent - offer almost 16 minutes of Psychedelic Doom/Stoner Metal being played yet again with heavy levels of Space Rock and Swampy Blues Rock with the final song Descent being the other standout track on the album. Descent lasts for over 10 minutes but it’s a dream song for Psych Doom/Stoner Metal fans. As the song has many different layers and levels of heaviness to the song. Bogwife channel modern-day YOB on the later stages of the album but still remaining true to their own sound.

A Passage Divine is another epic and stunning album to discover from the Danish Doom/Stoner Metal scene and Bogwife should be pleased with themselves in releasing a thunderous album such as this. If you’re on the lookout for a top-notch Spaced Out Doom/Stoner Metal experience then Bogwife would like to have a word with you all….

Thanks to Richard at Sheltered Life PR for the promo.

A Passage Divine is available to buy now on DD/Vinyl via Majestic Mountain Records.