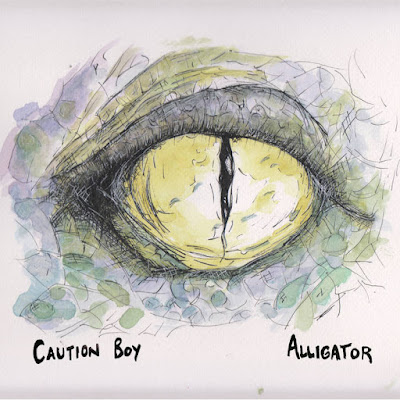 Alligator is the debut full length album from South African Sludge/Punk/Stoner Rockers Caution Boy and it’s a cool hard rocking and upbeat affair with spiky lyrics and vocals being one of the main selling points of the record. We’ve heard this style of music a thousand times before but this doesn’t stop Caution Boy giving their best shot and making a highly energetic record with fast-paced grooves that have a sprinkling of early-QOTSA energy to them.

The opening title track is a dirty and seedy number with a minor Psychedelic rumble going on in the background with the Punk fuelled Sludge/Stoner Rock riffs being very much in your face. The song has a slight 90s Rock sound but it’s consistently heavy and even super-fresh towards the end of the song.

Second song Silence The Screams is pure Punk/Sludge Rock territory with ferocious vocals and lo-fi rebellious sound. The song also has a sweet nature in the middle when the mellow vocals appear before the vocals change to a more aggressive stance. There is even a grunge identity starting to appear for Caution Boy and they now have a lot more to say with their music.

The band continue their Sludge/Grunge/Punk/Stoner Rock odyssey on 6 other songs on the album with Consolation, Swallow Me Whole and Hue being the other standout tracks on the album.

Alligator only lasts for twenty six minutes and maybe could have done with a couple more songs to get to the magical half hour mark but this is still an highly accomplished debut record which showcases another “KICK-ASS” band to come out from the South African Sludge/Stoner Rock scene. With the added bonus of Ruff Majik Every Snyman in charge of recording, mix and mastering duties, this record sounds impressive and allows Caution Boy to create music on their own exciting terms.

Thanks to Warren at Plug Music Agency/Mongrel Records for the promo.