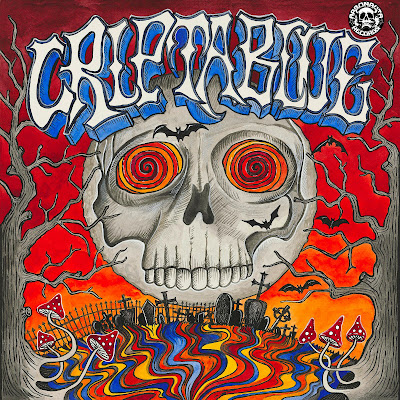 Cripta Blue is a Doom/Stoner Metal band brought up on the heavy power grooves of Black Sabbath, Saint Vitus and Blue Cheer. Throw in a subtle NWOBHM flavour and Cripta Blue are a different kind of power-trio who revel in the early beginnings of 70s Doom Metal. Their debut self-titled album is full of Psychedelic Soundscapes which brings perhaps a more modern sound. The guitars become down-tuned and more Occult based when Cripta Blue decide the time is right for that heavy sound to control the actions of the entire album.

Cripta Blue is made up of different bands from the Italian Hard Rock and Heavy Metal scene with members coming from Desert Wizard, Rising Dark and Talismanstone. This allows each member to bring their own respective sound to this album. The album has a refreshing seedy attitude and approach to the songs contained on the album. You can experience and hear that attitude on the excellent two opening songs of Mourning Pyre and Magickal Ride.

Both songs contain a gloomy approach with both the music and vocals offering a rough Psychedelic Rock and Blues Rock sound. Though bubbling beneath the heavy grooves is a HEAVY METAL attitude that allows the record to be a more “daring” album that you initially expect. There is a warped 60s/70s Psychedelic vibe to the whole album and that’s perhaps where Cripta Blue draw their biggest and best creative ideas from.

The atmosphere is very much “Streetwise” or “Streetwise DOOM” attitude with an “Outlaws” mentality with Sabbathian and Blue Cheer riffs coming from all directions especially on songs such as: Tombstone, Creepy Eyes, Death Wheelers and A Space Tale.

The final song A Space Tale sees Cripta Blue go full on Space Rock and bring an excellent and well put together instrumental song that reminds me of fellow of Italian Spaced Out Riffsters Black Rainbow and this remains one of the best tracks on the album, if not the best song. This ends the album on an almighty HIGH....

The production on the album is first rate with Cripta Blue being given every opportunity to impress with their own blend of Psychedelic and Trippy based Doom/Stoner Metal. Overall, this feels like an album that could have easily been recorded in the legendary Hard Rock, Heavy Metal and Doom Metal scenes of the 70s whilst offering a modern day perspective as well.

Cripta Blue are being represented by Italian Powerhouse Label - Argonauta Records. Another fantastic label bringing awesome undiscovered talent to the Doom/Stoner Metal masses and Cripta Blue is another great release from Argonauta.

Overall, Cripta Blue debut full length album is a triumph and if you miss the good old days of seedy 70s Doom/Stoner Metal then this album is an essential one to own.

Thanks to Mona at All Noir PR.

Cripta Blue S/T will be available to buy on DD/Vinyl via Argonauta Records from September 24th 2021.