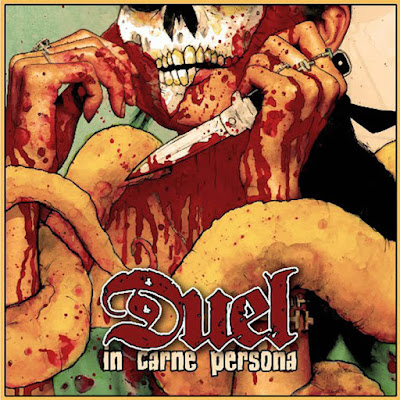 In Carne Persona is the 4th full length album from famed Doomed Out Heavy Rock Crew DUEL and is perhaps their most dazzling record yet bursting with their no holds barred style of classic heavy metal and modern sounding Doom/Stoner Metal. The band excel in bringing the different eras of Hard Rock and Heavy Metal with DUEL’s usually wild style of Psychedelic grooves layered on top for good measure.

The album does sound more vibrant and heavier compared to their earlier releases but DUEL still maintain their classic trademark sound which you can hear on the storming opening song - Children Of The Fire. A gloomy Stoner Metal track fighting with a top-notch classic Heavy Metal vibe with that fantastic Twin Guitar setup allowing the band playing different styles of riffs for classic heavy metal fans to get on board with even if they’re not a fan of the modern Stoner Rock/Metal backdrop lurking not far away.

Second song - The Veil - sees Duel go a bit more “Doom Metal” with an almost 70’s sounding Doom Rock/Metal attitude with even a “grungy” aspect being heard. Well it did for myself especially during the quieter parts and Tom Frank on solid form with his bombastic vocals. The band pay their huge respects to KISS, Thin Lizzy and Iron Maiden on this track which they may have done on previous albums. Add that modern Stoner Metal sound and DUEL just impress yet again with top-notch instrumental work and lyrics to match.

Third song - Anchor - has a more “Boogie Rock” centric approach with the music being quite feel-good and upbeat but still allowing DUEL the opportunity to bring a fast-paced Classic Heavy Rock style to the party. It’s deliciously or devilishly OTT and that’s down to the kick-ass OCCULT vibes held on this song.

DUEL continue playing their hybrid style of NWOBHM anthemic jams across 6 more songs with different scopes being played for the majority of the songs. Standout songs include: Behind The Sound, Bite Back!, Lizard Tongue and Blood On The Claw.

The album is being released on Heavy Psych Sounds who have handled all of DUEL’s releases since their acclaimed 2016 debut release. This is a good thing to see as Heavy Psych Sounds are one of the best underground labels currently out there (along with many others) and it’s cool seeing this partnership working so well.

Anyway, this is DUEL’s chance to shine in the limelight with their best release to date. The band takes many creative risks on this album. It may not seem like that when first listening to the album but give it a few listens and you begin to appreciate the different moods and styles of music DUEL use on this record.

Always backed up by superb production, this album is quite the wild ride with DUEL proving even when hitting upon some hard themes, they still manage to allow the listener to have a great time with this album with powerful riffs that have that classic and modern energy without losing focus or momentum.

In Carne Persona is another superbly entertaining record that ranks as their best release to date.