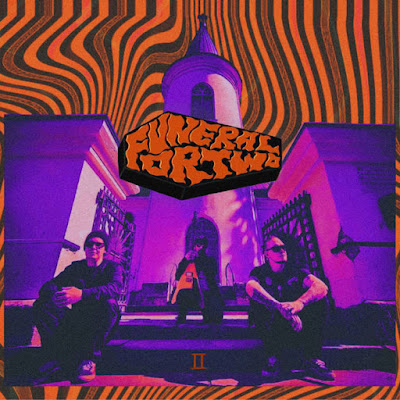 1.The Curse Of Lord

II is the new EP from Finland Doom/Stoner Metal Power Trio Funeral For Two and it’s a well produced and well made affair that sees the band prove their talent across two excellent tracks. The atmosphere is one of aggressive tone and gloomy atmospherics. There is a moody Blues based vibe held within the confinements of the music with a Black Sabbath aesthetic that’s very hard to deny.

Opening song - The Curse Of Lord - is constantly loud and aggressive with a thumping bass being one of the highlights of the song. It’s perhaps not as prominent as the Drums or Guitars but there is something that draws you into that part of the song the most. Well it did for myself. The song soon moves into early-Monolord territory with heavy down-tuned or down-doomed sounds. The song can be quite Drone and Distorted sounding which gives Funeral For Two a more “in-yer-face” sound. With the song being on for over 11 minutes the band are quite comfortable making this a more progressive affair.

Second song - La Muerte - runs for little over 10 minutes and continues the themes and ideas from the first song but adds a few different sounds along the way. The FUZZ is brought way up more on this song and you’re treated to a song that moves a fine line between Doom Metal, Stoner Metal and FUZZ Rock with those Sabbath/Monolord influences still allowing Funeral For Two bring their own distinctive flavour to the party.

II is quite lo-fi but that doesn’t take anything away from the great production held on the EP. This remains a product of the underground scene and it does play along with fantastic gloomy energy. I wish there was another song to go with the songs contained on this release. Just to see if Funeral For Two has more cool tricks up their sleeve but we can wait until the nest release.

Add this to your collection now. Superb stuff…..