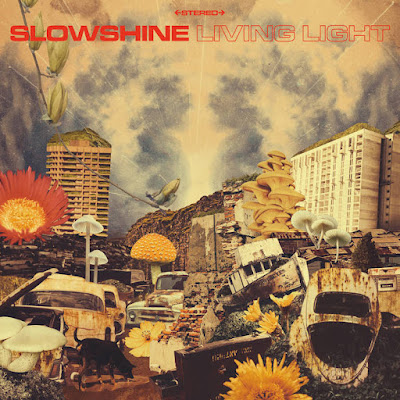 Slowshine is the new band from members of Earth Ship, GRIN and The Smokin’ 44s with Sabine, Jan and André already being part of the same band with Earth Ship. However, this is a different beast to Earth Ship and sounds more like a fully realized version of Jan and Sabine’s other project GRIN. WIth both bands focusing upon Doom Rock, Sludge Metal, Stoner Rock though Slowshine add elements of Noise Rock and Shoegaze into the mix.

Their debut album Shining Light can seem to have a comparison with bands such as FLOOR, TORCHE and Spotlights. However, Slowshine has a more upbeat, distorted and feelgood sound with the album being so cool and original in places.

The record has 8 songs and has a lot of sonic variety for the band to play with especially on the excellent opening song Trails with its heavy mix of Distorted Sludge Rock and a powerful Drone quality to it. The vocals rest on the psychedelic side of life but the music gives Slowshine a real muscular edge. The Psychedelic guitars move from Post-Doom to Post-Stoner grooves with no trouble at all and shows you what to expect for the rest of the album.

Second song - Battle Bones - is a heavier song with the band moving quickly onto Psychedelic Sludge Rock with Noise/Indie Rock attitude being played in the background. The band brings a Progressive feel to this song and it does remind me of the more quieter moments from GRIN’s last album but as I said with a modern Indie feel though still within the confinements of Sludge/Stoner Metal. The Shoegaze aspect is a great touch with Slowshine really starting to get in their creative stride with this album.

Third song - Heights - has fantastic dual vocal delivery from Jan and Sabine which makes this one of the standout tracks on the album. The Post-Punk feel brings a heavier psychedelic environment for the band to experiment with. Crunching sludgy guitars and great singalong choruses make it irresistible not to join in. You can hear the band's musical influences far and wide on this song and it still remains a cool and original sounding composition.

Fourth song - Wanderer - is perhaps the most laid back track on the album with a lovely slow-paced groove that lets you soak in the heavy and hazy atmosphere. Heavy Post-Rock guitars build upto heavier elements such as Sludge and Stoner with an almost 90s Alt-Rock/Psychedelic flow running in the vocals and lyrics. The 2nd half of the song sees the band play heavier grooves but still keeping in line with the earlier moments of the song.

The 2nd half of the album perhaps contains the heaviest parts of the album with Slowshine becoming more daring and creative with their music. The final 3 songs of Dunes Of Time, Living Light and A Quiet Place are the best parts of the album and even perhaps some of the best music I’ve heard all 3 members have been involved with including the mighty Earth Ship.

Living Light was an unexpected surprise for myself as I fell in love with this album quite quickly and one that has definitely earned a place on my list of Best Albums of 2021.

Overall, Living Light is an album backed up by wonderful production values that make this a must have album. If you’re a fan of Torche’s earlier albums such as Meanderthal then you have no reason not to check this band out. This is an exciting and bold album packed full of uplifting Sludge/Stoner Metal songs from start to finish.

Living Light will be available to buy on DD/Vinyl/Cassette from The Lasting Dose Records from October 8th 2021.