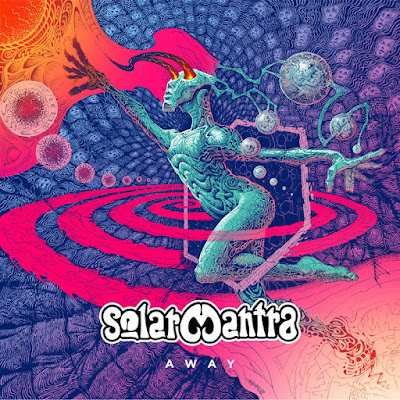 Away is the new album from Italian Desert/Stoner Rockers Solar Mantra with the band leaning firmly on the 90s scene for a heavier sound that has an early Orange Goblin and KYUSS twinge within their overall sound. The album is perhaps a tad too long but you can’t deny the quality of the songs held on Away. As this album moves between the different levels of Fuzz Rock, Desert Rock and aggressive Stoner Metal. The band even finds the time to add strands of Classic Hard Rock and Heavy Metal which you can hear in the excellent opening song Stoner Rider.

Second song Pacciani has a “Velvet Revolver” attitude and style to it but still being a Desert Rock/Stoner Metal song. THe music is plentiful and heavy with a buoyant attitude and the vocals have a troublesome feel to it. The song is a mixture of 90s Stoner Metal attitude and a modern gloomy vibe. This song shouldn’t really work but it does and that’s down to the cool inventive and different styles of music the band have employed here. The song is quite soulful within the quieter moments before the heavier grooves fully take over.

Third song - Candyman - opens with heavy grooves before the band bring a groove straight from legendary hard rockers “CREAM” were known for and the “sweet-natured” lyrics make this song quite a funky and fun little number.

From here on in, Solar Mantra play a mixture of different styles of Desert Rock and Stoner Metal for the remainder of the album with Tommaso vocals being the best thing about this record. The dude can sure sing and he has a great vocal style and delivery all of his own but the whole band bring their “A” game to the party and make this album a refreshing change of style.

Other great songs to checkout are: Monster From The Abyss, Thiz Iz, Hurricane, The Snake and Solar Mantra.

The second half of the album is perhaps the most exciting part of the record with the best ideas, songs and heaviest grooves can be found especially on the final 3 songs of the album.  As I said earlier in the review, the album is a tad too long but it’s the journey that Solar Mantra takes you on with this record that makes it such an exciting listen. The band never play it safe and take some bold creative choices on this record which ultimately works to their favour. This makes Away a fantastical and action packed record that will satisfy your Desert Rock/Stoner Metal cravings.

Argonauta Records are releasing this record and it’s good seeing Gero putting the spotlight on these guys and it showcases another great band from the Italian Stoner Rock/Metal scene.

Thanks to Mona at All Noir PR.

Away is available to buy now on CD/DD via Argonauta Records.