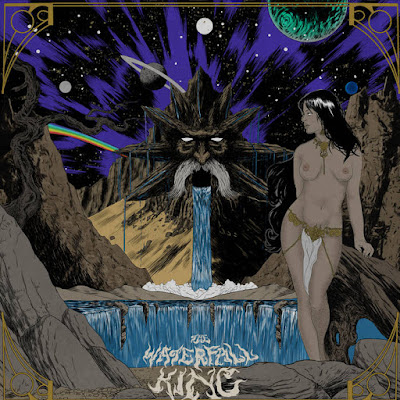 VOL. 1 is the debut album from Psychedelic Doom/Stoner Metallers The Waterfall King. The album cover was the first thing that caught my attention with this being designed by the always impressive MontDoom Design & Illustration. The album captures the essence of the music that The Waterfall King plays on this album. The sound is heavily inspired by the legendary Grunge scene and in particular bands such as Soundgarden and Alice In Chains but with a heavy Spaced Out Doom Metal Flavour allowing the band to play their own great style of Doom/Stoner Metal.

The album is packed full of great songs and sounds that stretch the whole boundaries of modern day Psych Doom/Stoner Metal with a brooding “Drone” element hidden in the background. If you dig bands such as Forming The Void, CONAN and Slomatics but with a heavy grunge aspect then The Waterfall King are a new band to get truly excited about.

Opening song - Filth - shows a brief glimpse of what to expect with this album. Heavy grungy guitars with a sludgier focus on melodies and progression. The vocals are clean based with a deep Layne Staley and Chris Cornell influence in places. The song moves at the power of its own pace but there is a good balance of slow and fast moving parts. The song is bleak and perhaps becomes better because of this aspect. The lyrics have a “real-life” feel to them,

Second song - Crystal - is pure Stone Temple Pilots nostalgia for all the right reasons but The Waterfall King still retains their own sense of style on this song. The slow-paced modern grooves come alive when the gloomy Stoner Metal riffs appear and the vocals add an emotional feel to them. The song is what I call Progressive Grunge with the band merging the different styles of music and they show a fine level of detail with the Psychedelic moments that drift into almost Post-Metal territory. One of the standout songs on the album with the band making their presence known and felt with great creative insight on this song and the majority of the album.

Third song  - Vessel - is where The Waterfall King become bolder and heavier with their music with the heavy distorted guitars and drums leading upto to a stunning vocal performance from Morlon. The song is slow-paced once again but it never overshadows the heavy drone based grooves doing their thing and once that “WALL OF NOISE” is brought down by a mighty sonic groove explosion the song becomes faster and a more threatening style of music. Perhaps more Sludge Metal than “Grunge” it’s cool to hear a different style of music from the band. Allows them to have a forward-thinking approach to their music.

Fourth song  is a cover of the Nirvana classic Something In The Way which was used last year in the new trailer for the highly anticipated The Batman film. This version is heavier and spacier than the original with Psychedelic elements that allows The Waterfall King version to be in their element on this track. It’s a perfect mix of respecting the original and bringing their own flavour to the song. This is another standout track on the album.

Fifth song - Black Rain - is my favourite song on the album with the track clocking in over twelve minutes. The song showcases everything good about this album. Heavy Spaced Out Sounds, A Street-Level “Grunge” Attitude and the Progressive Sludge/Stoner Metal grooves with kick-ass vocals and soaring Psychedelic backdrops that only expands Spaced Out surroundings of the album.

I won’t review the final few songs as I felt I may have spoiled or revealed too much. Though the band continue to impress things even further especially on Earth Roamer and Droning.

VOL. 1 sounds epic from start to finish with brilliant production values that bring a serious level of heaviness to the party. I’m hoping that there are plans for a physical release on Cassette Tape or Vinyl in the near future. As this album deserves the vinyl treatment. So let’s hope some underground record label signs these guys. As no doubt they would make a “killing” with the Doom/Sludge/Stoner Metal community. This album is only to grow in reputation and become one of the acclaimed releases of the underground scene. If not then there is no justice.

VOL. 1 is a breathtaking debut from a band doing something daring and different with the confinements of Doom, Sludge and Stoner Metal. This is one of the best albums of the year. Top 10 material. No doubt.