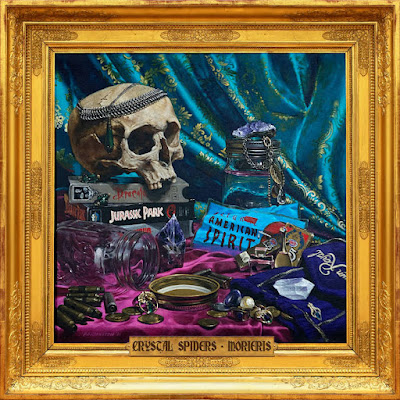 Morieris is the 2nd full album from Stoner/Doom Rockers Crystal Spiders who come back quite quickly after releasing their 2020 debut album Molt. This record carries on the same themes and ideas heard on that record but there is a different style of heaviness and gloomy Occult Rock delivery on this album. It was also a wonderful decision to have Brenna’s bandmate from Lightning Bolt and C.O.C. legend Mike Dean.

Mike doesn’t allow his formidable talent to overshadow what is essentially Crystal Spider’s show. This record is a masterclass in Occult Doom/Stoner Rock with Brenna’s vocals being superbly earnest, bewitching, captivating and oozing Classic Doom Rock bravado. Brenna can sure hit those high notes when the album calls for them but it’s the Heavy Blues Rock parts where Brenna impresses the most. A mixture of different vocal styles of the last 60 years of Hard Rock genres will keep listeners on their toes.

Tradd also gets his chance to shine on this album as well, providing the “true” heartbeat of the album for everything to happen from the ground up. Tradd is also part of Doomsday Profit who will be releasing their excellent debut album next month. So look out for that one when it drops.

There are 8 songs on the album with Crystal Spiders offering an Occult Rock based adventure on all of the songs that still take a lot of creative risks that will surprise you along the way. Mostly inspired by 60s and 70s Hard Rock and Classic Doom but it’s good seeing Crystal Spiders using modern day sounds such as Drone Rock, Psych Rock, Stoner Rock and even Distorted Grooves come into play on this album.

Crystal Spiders also managed to include High Priestess NIghthawk of HEAVY TEMPLE with a fantastic guest cello appearance on the album.

This all builds up to a more exciting, richer, heavier, bolder and more daring release compared to their celebrated debut release and it’s good seeing the band continue their relationship with Ripple Music. With this being a Ripple Music release then you know this is going to be a quality sounding release. Ripple Music always releases high quality sounding albums and Morieris is no different.

Morieris is a turbo-charged and adrenaline fuelled slice of Psych Doom/Occult/Stoner Rock that leaves you wanting more.

Morieris is available to buy now on CD/DD/Vinyl via Ripple Music.