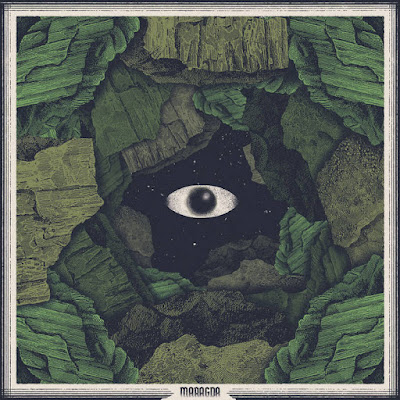 Maragda are a Spanish Psych/Space/Stoner Rock Band who focus on the teachings that bands such as YES, Rush and ELDER have played over the years. Their debut self-titled album is primarily an exercise in first class Psych Stoner Rock but the band show their appreciation for other sounds such as Prog Rock, 70’s Hard Rock, Fuzz Rock and even Folkier elements for this album.

The album is quite experimental with it’s deft touches of Heavy Psych/Space Rock passages and Folk based moments. Sometimes All Them Witches' majestic storytelling comes into play and even some of that band’s passionate musical style of play. Opening song The Core As The Whole is quite different from the Stoner Rock standard sound with the band playing different styles of music and none of them becoming the dominant force. The folk vibes and heavier space rock themes are the best part of the song and gives you a great glimpse on what to expect for the rest of the album.

The record can be quite jazzy and way out there which you’ll hear on the second track The Calling. Sometimes it feels like it's a different band compared to the first song. This song does have a thrilling fast-paced narrative with great vocals to match. The grooves are plentiful but can feel overpowering at times especially with the many different styles of music on offer here. It’s still an exciting blend but will take multiple listens to get fully on board with.

The album is a concept album which is explained further below:

“This record tells the story of Maragda, a civilization that took refuge underground after the Great Disaster. Many years have passed now, and the memory of a life on the surface has completely faded. People live under the oppression of a totalitarian government, The Core, when suddenly a strange voice speaks inside their minds. After this call, a group of rebels launches an expedition through The Unknown, willing to discover the secrets of Maragda”

Despite the subject matter listed above this album does have a cool feel good factor that is very hard to ignore. The other songs on the album sees Maragda go through their love of Heavy Rock Music over the last 50 years. The album is highly adventurous and the experimental style of Psych Rock when fused with the album's manic Prog Rock energy is where Maragda really starts to impress the most. Wait until you the glorious synths that appear on the 2nd half of the album. One of the standout parts of the album especially on Beyond The Ruins matched with stunning Stoner Rock/Metal riffs.

Overall this is a quality record from start to finish that’s backed up by daring production values that allows the band to strive for their full creative vision whilst still offering a high amount of great grooves for the listener to lose themselves in.

Thanks to Necio Records for the promo.

Maragda's debut album is available to buy on CD/DD/Vinyl from the links below.