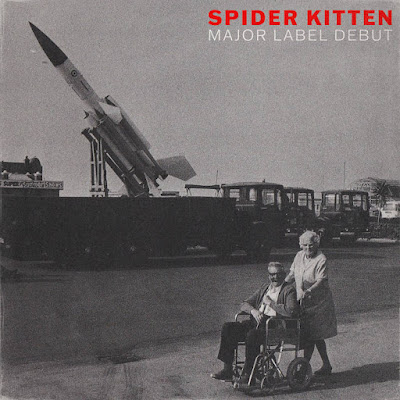 2.The Art Of Sleeping

5.Self Care (Makes Me Wanna Die)

What a way for Spider Kitten to celebrate their 20th Anniversary as a band by releasing one their best releases to date with Major Label Debut. With the band drawing upon bands such as Nirvana, Soundgarden, Alice In Chains, TAD and the Sub Pop Records roster. The band have written a serious album that does touch upon Mental Health Trauma though the grooves are varied especially when Spider Kitten brings a heavy Sludge/Stoner Rock shine to the album.

There’s only 8 songs on the record and they’re quite short compared to Spider Kitten standards. So the guys have gone for a direct style of Grunge/Stoner Rock with even the vocals getting a grungy makeover with shades of Chris Cornell and Layne Staley being heard. The music is frantically heavy with the first few songs A Problematic Favourite, The Art Of Sleeping, Maladjusted and Hearts & Mindworms  being perhaps the standout songs of the record with the deep Soundgarden/AIC influence but told within Spider Kitten unique way of twisted storytelling.

There’s a heavy Punk Rock aesthetic with this album and Spider Kitten drift away from the Grunge world to the more Punk based Alternative Sound for the remainder of the album onwards from Self Care (Makes Me Wanna Die). I will admit it does slow down the exciting atmosphere of the album just a little bit but it’s good seeing Spider Kitten bringing a more experimental sound for this part of the record. Though this part of the album moves into fast based Punk-Rock/Alternative Rock territory, the band still manage to find the time to bring that earlier Grunge based sound on the final stages of the album.

The instrumental work is excellent and makes you take notice of things currently being played around you. There is a lot of cool musical creativity on this album with Spider Kitten touching upon a hard subject such as Mental Health. I’m thankful that Spider Kitten has tackled the subject in a superbly entertaining manner.

Major Label Debut is a welcome return to form for Spider Kitten and ranks as one of their best releases to date. This record will no doubt impress their already established fanbase and maybe entice a few more followers to the Spider Kitten cause.

Thanks to Spider Kitten for the promo.