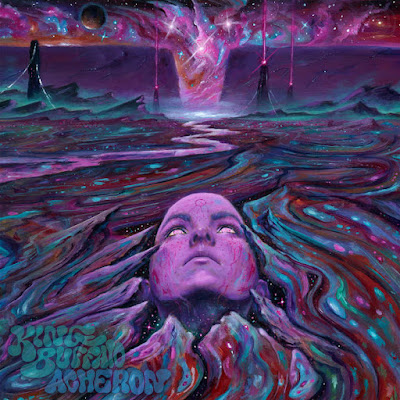 Acheron is the second album of a planned trilogy that King Buffalo started back in June 2021 with The Burden Of Restlessness. So almost six months later we have the second part with Acheron meaning “River Of Woe” in Greek. The band are also calling this album “The Cave Record” as it was recorded in an actual cave during COVID-19 Pandemic. This album does have elements of real-life sounding Water on certain stages of the album.

Acheron is perhaps a classic sounding King Buffalo compared to The Burden Of Restlessness. As that record had a deep “TOOL” influence” at its main core. This is King Buffalo doing what they do best by playing haunting Psychedelic Stoner Rock songs with emotional melodies, vocals and trippy lyrics that bring the Psych Spaced Out element back from their earlier releases to a more grounded Prog Rock feeling. The album does have a lot of Ambient textures on this album which was another welcome surprise.

The album contains four tracks with all the songs lasting around the ten minute mark. So Prog Rock is the main key here with each song having the perfect balance of Ambient based Psych Stoner Rock/Metal epic riffs.

Opening song - Acheron - is the perfect song to open the album with. As it’s quite hopeful but also quite bleak when the gloomy Post-Stoner parts appear. The song sees the band explore their Psych Rock influences whilst bringing a heavy and almost Prog Metal vibe heard on their last album. This is the best of both worlds as King Buffalo brings an isolated feeling to this song. The grooves and solos are plentiful with majestic vocals to match.

Second song - Zephyr - feels like it could have easily came off one of their earlier releases for the first few moments with it’s upbeat lyrics. The music does go slightly Post-Rock but that’s what King Buffalo are so good at. Blending different cinematic sounds to a more upbeat style and then bringing a heavier atmospheric style that changes the course of the song for the better. They do this on this song with the swirling ambient moments that play for the first part of the song. The instrumentals work so well with the album being recorded in a cave. This gives this song and perhaps the album a more “EARTHLY” feeling.

The other two songs on the album Shadows and Cerberus does offer King Buffalo the opportunity to play a heavier style of music but still retaining the core energy of the opening two songs. Shadows is perhaps the standout song on the album for myself. It has a more free-flowing attitude to the point you don’t know how the song ends or up which direction the album will take next.

Production values are first rate with King Buffalo bringing a more dynamic sound and presence compared to their last album. Acheron is another wonderfully epic album from the band and one that will allow the guys to easily have another Best Album Of 2021 to their credit. Well, it’s already claimed a spot on mine along with The Burden Of Restfulness.

King Buffalo are perhaps one of the most forward thinking Psychedelic Stoner Rock Bands we have in the field. There is still one more chapter to come from the band and I for one am truly exciting what awaits us all.

Acheron will be available to buy on CD/DD/Vinyl from December 03rd 2021 from the links below: