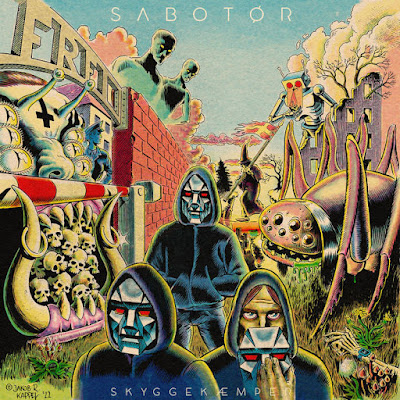 Skyggekæmper (meaning Shadow Giants) is the new album from Danish Stoner Rockers SABOTØR and this is a turbo-charged album with the vocals sung in their native language. This isn’t your typical Stoner Rock album with SABOTØR having an experimental drive to their overall sound. The album is quite fast-paced and aggressive with a slight Alt Rock and Punk Rock sound.

This isn’t going to be for everyone and if you’re not convinced by the opening song Robot then it maybe best to look elsewhere. However, SABOTØR brings a wonderful style of eccentricity to the album with the trippy noises and ambient based glitches that all merge together for an almost “Party Rock” style atmosphere. The vocals are all over the place but in a good way with a buoyant performance from lead vocalist J.R.

Second song Ro På, Danmark! Is a funk rock driven number with SABOTØR perhaps drawing on influences as diverse as Red Hot Chili Peppers on this track. Fast-paced grooves and Punk Rock sounds merge surprisingly well with the Stoner based elements heard on this track.

Third song King Diamond is perhaps the most straightforward track on the album with SABOTØR focusing primarily with one style of music and that’s Stoner Rock through and through. The instrumental work is loud and downright catchy. J.R.’s vocals continue with their wild showman attitude especially when the loud shrieks appear. Though, it’s the music that wins the day with SABOTØR playing some of the best sounds on the album. Check out the excellent guitar solos towards the end of the song.

Other standout songs include: Arbejde Gør Fri, Oprør! and Skyggekæmper

The album keeps up with its unpredictable nature as SABOTØR bring heavier grooves and creative themes to the second half of the album especially on the final two tracks of Edderkoppemor and Skyggekæmper.

I’m glad I’ve listened to SABOTØR. As this did put me out of my comfort zone at times even with this being a Stoner Rock album. The album can be quite hard to listen to at times but the album's upbeat nature can be infectious in places. Just be prepared for an experimental style of Stoner Rock fused with different sounds that you wouldn’t expect for a Stoner Rock album.

Overall, Skyggekæmper is a highly confident affair that offers a superbly different slice of Stoner Rock based madness.