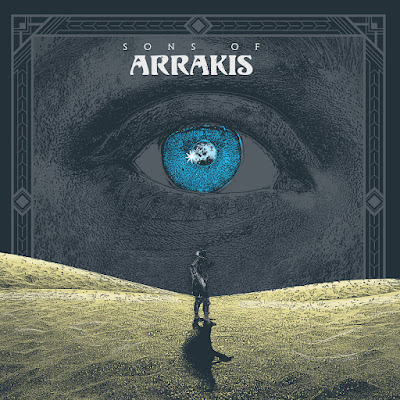 Volume 1 is the debut full length album from Psych Doom/Stoner Rockers Sons Of Arrakis and is inspired by the legendary works of Frank Herbert and the world of DUNE. These guys aren’t the first band to release music inspired by DUNE. There’s been countless other bands from the Stoner Rock/Metal field. However, Sons Of Arrakis are the one of the most intriguing by playing a classic and style of Californian based Desert/Stoner Rock.

The album does have its fair share of Spaced Out elements within the lyrics and Psychedelic textures heard on the record. Merging 90’s Desert/Stoner Rock passages and the bleak sci-fi imagery of DUNE, the music is a more Progressive style of WEEDIAN sounds. The vocals are perhaps too upbeat for certain elements of the DUNE story though this allows Sons Of Arrakis to tap into the classical vocal structures of the Stoner Rock/Metal movement and bring a more accessible way of delivering the classic SCI-FI based story.

Sons Of Arrakis also offer a gloomy DOOM based landscape on earlier tracks such as: Shai-Hulud, The Black Mirror and Temple Of The Desert. This album has an addictive DOOM-POP flavour with Sons Of Arrakis singing gloriously uplifting vocal harmonies with the music keeping the Psychedelic Doom/Stoner Metal spirit alive and well with thrilling guitar solos that evoke memories of bands such as Black Sabbath, QUEEN and Thin Lizzy.

Sons Of Arrakis inject some Coheed And Cambria world-building into the mix on the later stages of the album with wonderfully written lyrics leading the way.

The second half or the album does have a more cinematic scope with the band trying to include as many themes and ideas from DUNE on the final few songs on the album. The band may miss mark ever so slightly with the overall story, the music is a different story altogether. With Sons Of Arrakis perhaps playing more Progressive Stoner Metal sounds compared to the album's earlier free-flowing and adventurous Desert Rock groove. This is still an exciting blend of different styles from the Doom/Stoner Metal underground that ultimately leaves you wanting to hear more.

Volume I is perhaps described as “The Best Album The Sword Never Released”.

Sons Of Arrakis have delivered a superbly entertaining ride that all you serious self proclaimed followers of “KANGAROO MOUSES” can fully get behind.