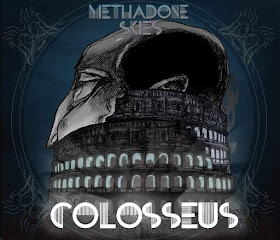 Romania's Methadone Skies have been making a name for themselves over the past few years in under found music circles, not only with their stunning live performances but also releasing three excellent albums in 2014s Eclectic Electric and 2012s Enter The Void and their debut Explosions Of The Sun from 2010 and you can now add their new album Colosseus to that list, an all encompassing album that builds upon their previous work and takes it to the next level, such is the monolithic nature of the album.

This is an epic album of the highest order, a stunning mix of psychedelic progressive jams, heavy as thou doom riffs and blurry shoegaze elements. The amalgamation between melody, atmosphere and out and out heaviness is joyful and the whole album is hypnotic throughout, to the extent that listening to Colosseus is a musical experience that you rarely find.

Picking out a track as a particular highlight from Colessus is a tricky one as you really need to listen to the entire album from start to finish to properly immerse yourself in the Methadone Skies groove as the album as a whole is such a powerful piece of work, however I will say that there has to be a special mention reserved for The Elemental, a breathtaking song that is the very definition of the word powerful. The album as a whole though, should be consumed from beginning to end as you let the sound annihilate your thoughts and take over your brain, the sound keeps on building and building, creating a pressure that is released in the most brilliant way possible. This is music for the soul, at times achingly beautiful and joyful but at others crushingly heavy and harrowing but when it comes down to it, Colosseus is never anything less than all encompassing.

This is an album that you will not forget in a hurry and will be not only a joy when played live but also an unforgettable encounter Miss Methadone Skies at your peril, this is an experience that once heard, will never be forgotten.

Thanks to Methadone Skies for the promo. Colosseus will be available to buy on CD/DD/Vinyl from Haywire Records from April 4th 2016.

With the band being the cool awesome guys that they are, they have let ourselves premier the brilliant song - The Elemental - from Colosseus.


Or you can watch the video for The Elemental below as well.