Throw Caution To The Wind - An Interview with R.I.P.

Today's guests are about to release a highly anticipated album that will have the Doom/Stoner Metal community talking for a long time to come. They call their blend of music – STREET DOOM.

And these guys don't FUCK around where the riffs are concerned. Their debut album – In The Wind – is already starting to receive some impressive reviews. Our team member, ThisHairyGuy, said this about the album.

“In The Wind’ is the impressive output of a reliable and well-oiled, vintage groove machine that relentlessly and unapologetically keeps plugging away as newer models come off the production line, fall apart and die. It is the classic VW Camper that hurtles past some guy standing on the hard shoulder looking furiously into the smoking bonnet of his modern 4x4. It is a record that is completely comfortable with the size of its dick and has nothing to prove.”

I had to find out about these self-professed – Street Doomsters – and see what makes them tick and what the future has in store for us all....

Hi guys. How are things with you today.

Another day closer to death…

So why did you choose the name R.I.P. for your band. Though I'm glad you did as it's awesome to see a band without the terms – BONG, WIZARD, WEED, ELECTRIC in their band names.

We wanted a name that reflected what we wanted the band to sound like: straight forward and morbid, and also many of our fans do not know how to read so we wanted to make it something easy to spell and pronounce for them. 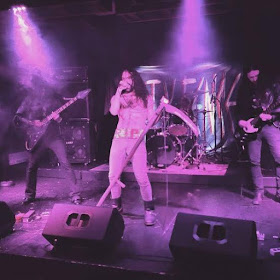 How did the band get together. Did you all know each other before forming the band.

Angel and Fuzz have been playing music together in different bands for the last seven years, when they decided to start R.I.P. they knew they needed the most depraved knuckle dragger in the northwest to keep the rhythm and Willie D was the only dude who had enough white zombie CD's to make the cut. We went through at least four or five different bass players who couldn’t handle the R.I.P. lifestyle or didn’t have long enough hair until we recruited Jon the mingler Mullett, a dude Angel and Fuzz have been touring with in other bands for years, and the real R.I.P. finally solidified.

For a first time listener looking to discover your band - How would you describe your music. Though I see your music is being classed as “Street Doom” - What is STREET DOOM. Love that term!!!

Seems like every day there's a new “heavy” “doom” band that tries to be the slowest most magickal group ever, burning candles and herbs on a stage draped in “mystical” symbols, reading their mom’s chicken soup for the Wiccan soul book for song titles, writing concept albums about their astrological sign etc etc, in R.I.P. we want heavy metal out of the stars and into the streets. We write songs about the shit we experience everyday, fear, death, drugs, panic, real shit. We don't have 50 pedals hooked to each instrument, we don't try and mystify anyone with some fake witchcraft shit we read on Wikipedia, its just street doom plain and simple.

Your new album – IN THE WIND – is a brilliant seedy, dark and twisted tale into the world of Occult based Doom Metal. Well that's my take on it. If you have to describe your upcoming album in your own words to a perspective new fan – What would you say to them.

Was recording the album an easy or hard process to complete.

We’re a live band primarily so it was a challenge to capture what we do live in the studio, but Andrew Grosse has always been the fifth member of R.I.P. he’s recorded everything we’ve ever done since our first demo in 2012, so working with him made it easier. We’ve all been a fan of Brian Ellis’ work with Egyptian Lover so we knew we could trust him to craft the street doom sound we needed in the mixing, and he definitely came through. 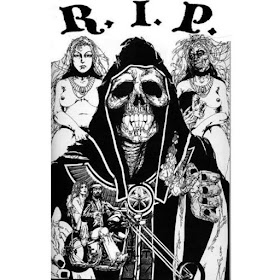 The album is being released by the excellent TOTEM CAT RECORDS. How did you get involved with them.


The label owner messaged us saying that he heard a few tracks on YouTube and was curious to see who was releasing it and that he would be highly interested in working with us in the future. we told him that the songs that he heard were actually new songs and we were still trying to figure out who was gonna release it. The rest was history.


How hard is it being a band in today's world. What are the most difficult aspects in being in a band.

Our biggest challenge is finding bands that don’t suck to play shows with, and close second is find audiences that aren’t wimps to play to. Its bleak out there.

What is the song-writing dynamic in the band. Is it a group collective or down to one individual.

Fuzz handles the lyrics, Angel writes the riffs, but the process of melting all that shit down into an actual song is everyone 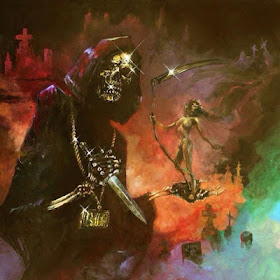 Can we talk about the fantastic album cover. That's perhaps one of the best covers I've seen in a long time. It looks it was inspired by classic 70s/80s Heavy Metal records. Was that the case.

We talked with Adam about concepts and aesthetics we dug, 70s sleaze, 90s southern rap, spooky shit, tough shit, and he ran with it and cooked up a masterpiece. We’ve been playing shows with Adam’s various projects throughout the existence of R.I.P. and we knew he more than anybody picked up what we were putting down and could turn our sonic message into a morbid vision

I see you got Adam Burke to design the cover. How did you get Adam involved as he's drawn some amazing album covers over the years within the Doom/Stoner Metal scene (Adam has designed covers for Sons Of Huns, Ancient Warlocks, Danava, Diesto and Ice Dragon. He's also Guitarist/Vocalist with FELLWOODS)

Angel and Fuzz have been playing shows with Adam around the Northwest heavy scene since before R.I.P. and Fellwoods were around, and his new project Pushy is one of the best bands out right now we play with those guys all the time, he’s been down with R.I.P. since day one we’ve played shows with all his bands throughout the years so it only made sense to get him to apply his paintbrush to the project, he’s one of the few that really gets it.

What inspired you to become a musician? Any particular album, band or life-changing event that told you – Yeah, that's what I want to do....

Death is always on my shoulder, never letting me forget the grave is the only guarantee and we’re living life on loan, i got no choice but to bang my head and scream with whatever little time the reaper lets me have before that scythe comes down forever, there's no time to waste so play loud, play hard, play with your guts, be real before you’re bereaved, that's whats kept me dragging myself up on stage the last 15 years, that's the attitude i bring to R.I.P. 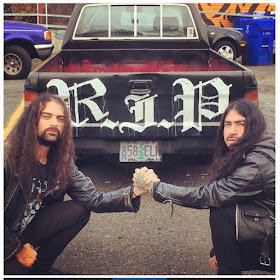 Will you be touring this record heavily. If so what dates are you performing and what can people expect from the live R.I.P. experience.

We’re doing a full US tour this spring, probably another west coast tour this summer, and got our eyes on Europe after that. When R.I.P. comes to your town you can expect all wimps to wither under the scythe, you’ll see leather, hair, spikes and studs, you’ll hear the most regressive rock n roll to waste your brain cells to, and Fuzz will probably talk allot of shit to you too. Here are the dates so far:

Words by Steve Howe and R.I.P.

Thanks to Claire at Purple Sage PR for arranging this interview. Thanks to R.I.P. for taking the time out to talking to me. In The Wind will be available to buy on DD/Vinyl from Totem Cat Records from March 2016.