An Interview with VINUM SABBATUM

I'm kinda new to Vinum Sabbatum's world. I've only known about their existence for the last few weeks. As a few of my pals told me to check them out recently. Boy, was I surprised as Vinum Sabbatum's style of Proto-Doom Metal had me hooked from the word go.

Vinum Sabbatum's sound is firmly rooted in 70's style Hard Rock. The band released their last album - Bacchanale Premiere back in 2012. Four years later and the band will be releasing their second full length album – Apprehensions – which we will be reviewing at a later date. Though let me say it's a killer album and one that has a different vibe to their debut album.

Aleks E recently caught up with Mika Pajula (bass) and Janne Salo (vocals) from the band to see what has happened since their debut album and what people can expect from the new album.

So enough of my ramblings. Time to get on with the interview.


Hello gents! I heard no news about Vinum Sabbatum since Eyes Like Snow released your debut full-length. What did the band do since then? I saw only that you play few rare gigs, so how active was Vinum Sabbatum during this period?

JS: Well, how dull it seems, we are employed family men soon in our middle ages so there are priorities and chores you have to take care before you can book rehearsals, studio dates or gigs. I myself have reached that certain point in life where own couch attracts you most as an object. Then we had line-up changes and longer periods with no activity at all, but the band was never in total halt or being unproductive. I compose all the time music for the band. It’s maybe because I have energy and interest to play only in one band at a time. 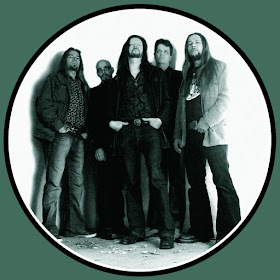 Didn’t you try to push the band forward with your own efforts harder? Or do you have some booking agency or the label supported you enough to help with gigs’ organization outside Finland?

MP: We don’t have agency and we want to perform only in a suitable gigs as far as the music goes. We keep in contact with bands that shares same kind of style or approach to their music and that way we can arrange better bill for each gig. Of course, we like to do gigs more but we don’t see it useful to go through every joint around. It’s also impossible to do longer tours even in Finland because, as previously stated, we have our day jobs and families to take care of.

With what kind of bands do you usually share the stage? Do you have bands in Finland with which you play more often than with the others? I saw that you played the gig with Wandering Midget, don’t you know if they’re active still?

MP: There’s few bands that we have played occasionally; Cardinals Folly, Concrete Swine and Murder Hollow are few names that comes up to mind right now. Don’t really know about Wandering Midget’s whereabouts but they are label mates and a great band. 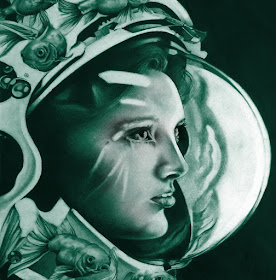 Eyes Like Snow is going to release your second album “Apprehensions” on November 2016, and the first thing that strikes me is the artwork. How did it happen that you turned away from that stylish occult-influenced image to space-oriented themes?

JS: Janne the guitarist knows the artist Stella Keppo, she has quite impressive works. We asked her if we could use her art on our album and she agreed. As mentioned, our new stuff is different to the old one. There is not much occult or psychedelic left. Music is very much in vein of 70’s style classic hard rock with progressive and doom influences. The iconic astronaut figure on the cover is of Anna Fisher, the first mother in space. The word apprehension means feeling of fear and anxiety of something. That expression is pretty well on the astronaut’s face, whatever she is staring, be it Earth, The Universe, future or something else…

Same about music – it’s subjective opinion, but even Vinum Sabbatum keyboards sounds a bit different now and the whole atmosphere of the album differs from “Songs from the Convent”. Was it your decision from the very start to change band’s concept?

MP: I’m always fascinated about bands that can be heavy without sounding heavy. We always knew that we would like to level up from our roots as the years go by but I don’t see that big difference. It’s still Vinum Sabbatum but little bit more thought out… It was mainly just Hammond-organ driven in the beginning, having that 60’s feel to it and now we use a bit more Moog and synthesizers to create more layered sound to give that mid-to-late 70’s feel.

The band was tagged also like retro doom band when you just released your first songs, what’s now? It seems that keyboards solos nearly take place of guitars, that seems like progressive vintage rock stuff!

MP: It’s true that there are much more keyboards than before but I think it’s all good as long it’s done the right way. People can call it what they want, for us all that matters is that music has to have some sort of direction and personality like Janne said. It’s alright to have small paths that lead to somewhere else than what you might be expected to do, push the boundaries, but I don’t personally feel that we have gone too far off from what we did in the beginning.

Did you change also your approach to lyrics composing? What are the topics of your new songs?

JS: General theme in the lyrics is how all the great and high ideals and dreams seem to vanish into air for so many in our society, no matter how hard you try to hang on to your thing. It seems it just keeps coming back to me as a theme when I start to write lyrics. Not much success stories between the lines…  Song “Fallen Savior” is about a good-hearted charity worker who always turns another cheek when slapped into face verbally or by whatever means. Then one night he gets beaten badly in street violence incident. After that his personality changes and he becomes a vile monster himself, wondering why he was pretending that he could change the world.

“Profane Soil” is the oldest song on the album. Lyrically it is a post-apocalyptic tale of how beautiful and serene can ruins and once threatening monuments be on the Earth after human.

To me the most intriguing lyrics are in “Creation Machinery”. It tells a story of people cryopreserving themselves in liquid nitrogen tanks after death, in wish for future science to wake them up. Well, it does, but there are no kind people bringing them back into life but merciless robots who have taken over the world. They use those poor humans in their experiments to understand what feelings and consciousness are.

Hah… Well, it’s too complex! How did you figure out such concept for this song?! By the way, can you name bands which you love or respect also because of their texts?

JS: I don’t know. I just start writing and wish that something unfolds. In this case it started from one word, “nitrogen”, because it sounds vocally cool.  This lead to next thought of body cryopreservation and the kind of death cult phenomena around it.  Writing is really a strange and a bit scary experience with lyrics like “Creation Machinery”, where for example a body mutilation is described in detail. And it’s all automatic, you just think to yourself that did I really type that, that’s disgusting, what lives inside my head, heh.

But in general I like intelligent and poetic lyrics, stuff like Ronnie James Dio did. I like lyrics of Marco Hietala on Tarot releases, especially on “Stigmata” album. Then again some simple down to earth rock lyrics written by legends like Lemmy or Bon Scott can hide great wisdoms between otherwise tongue in cheek lines.

How do you plan to support “Apprehensions”? What are your ambitions consider the small tour for example? I bet that you could easily conquer more fans if you would be able to hit the road and visit some countries with new album.

MP: We are planning more gigs in Finland around the release of “Apprehensions” and maybe doing something internationally within next two years; hopefully some small festivals if possible. Let’s see how the new album is going down and if that creates new opportunities…

JS: We have a few gigs booked in Finland this year and we are about to shoot our first real music video with proper production. That’s going to be interesting. We have actually one gig abroad in October in Tallinn, Estonia. For us Finns it is questionable though if Estonia can be considered as a foreign country since ferry takes you there from Helsinki in two hours. We even don’t take a van with us. The venue will arrange transport for our gear from the harbor. There needs to be clear demand for us playing live aboard before we can think of going further south. Still, perhaps our main - tongue in cheek - goal straight from beginning has been to play in Roadburn festival one day. Depending of how “Apprehensions” does, it might be even realized.

Then I wish you all the best in spreading Vinum Sabbatum’s Word further! And yes – Roadburn is the right place for such a band. By the way, Russia isn’t far from you too. Did you get any invitation from here or any feedback? That’s the last question. Thank you!

MP: There hasn’t been any serious talk of gigs but who knows maybe someday. We would like to come and visit Russia if we can get it scheduled. Feedback from there has been really positive through all these years, so all we can say is a humble thank you. We hope our friends over there can find our album and visit our Facebook page to drop a few lines about it too - your voice really means to us a lot!.

JS: I like St Petersburg, been there couple of times. I have this one favorite bar - which of name I can’t remember - somewhere along Litenyi Prospekt, a small joint where they have live music every night. It’s maybe just a bit too small for doom bands..