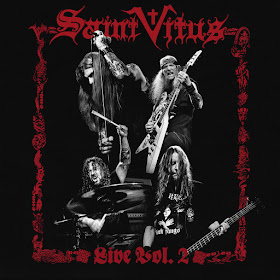 For the past thirty seven years, Saint Vitus have been THE quintessential doom band and have always excelled in a live setting and this recording of the band in their element during a gig in 2013 in support of their their brilliant comeback Lillie: F-65 album is a gift from the musical gods. This album follows their first live album (recorded way back in 1990) and shows why not only are the band so highly regarded as legendary figures in doom circles but they are refreshingly still as good nowadays and time has not blunted their edge in any way.

Mixing material from their classic albums, V, Mournful Cries, Hallows Victim and of course, Born Too Late with the newer material from the Lillie: F-65 album (which showed that the band were still at the top of their game despite such a long absence) such as the more up tempo Let Them Fall and the sprawling The Bleeding Ground, Saint Vitus deliver a lesson in doom from beginning to end.

When Vitus unleash classics such as the punked up White Stallions, The Waste Of Time, their revered cover of Thirsty And Miserable, Dying Inside and the closing, extended and utterly majestic version of Born Too Late, you appreciate even more just how good a band they are and how many bands they have influenced and the whole thing is a treat for your ears.

The sound is spot on throughout this performance with the band playing a blinder. Winos vocals are faultless and that signature guitar sound of Dave Chandler is a joy to listen to and with bassist Mark Adams and new (at the time) drummer Henry Vasquez (who replaced the much missed Armando Acosta) holding it down with the epic doom rhythms. Towards the end of the set, Wino asks "Are You Still With Us" and it is clear that everyone listening most definitely is. These are some of the greatest songs ever written performed with passion and class.

With Wino dedicating time at the moment to fellow doom legends The Obsessed, Saint Vitus are getting back together with original vocalist Scott Reagers (which is a treat in itself for doom fans lucky enough to see this) for a tour so it may be some time until this lineup is back in the live arena so until then, put Live Vol. 2 on, turn it up loud and enjoy the greatest doom band in the world doing what they do best.