An Interview with Ryan Cole from DESERT STORM

UK Sludge/Blues/Stoner Rockers have been going together as a band for 10 years now. Since then they have won a loyal following within the Sludge/Stoner Metal community with their fantastic albums and fearsome live reputation.

I'm happy to say that Ryan Cole (Guitars) from the band agreed to do this interview.

Hi Ryan. How are things with you today. Been a while since we last spoken. What have you guys been upto recently.

Hi Steve, yeah I'm good thanks. We've just been writing a lot of music for a new record...(more news on that soon though), playing shows and getting ready for our European headline run in a few weeks.

So we are here to talk about your upcoming European Tour. Can you give more info on what. Which cities and towns you will be visiting. Any cool support bands people should look out for.

Yeah we're really looking forward to the tour, and playing some countries we've never played before. On the tour we play UK, Netherlands, Belgium, Germany, Czech Republic, Slovakia and Poland. Some cool supports confirmed, in UK we have our friends in Grifter, Morass of Molasses & Sergeant Thunderhoof supporting, in Europe there are lot, but I like the sound of Android Empire in Berlin & FAT that are doing the Kosice (Slovakia) show.

What will people expect on this tour compared to your previous tours.

Compared to previous tours, people can expect a very different show. We now have lights on stage and a great backdrop, plus lots of new songs which are moving into a heavier direction...and some almost post rock moments...quite different from the old stuff, but still that Desert Storm sound.

Will you be going on another UK tour later in the year. Hopefully a Newcastle Upon Tyne date. Though I'm just being selfish there. HA HA.

Yes we really hope to do another UK tour later this year, hopefully it will come to fruition! and hopefully with a Newcastle show...we'd love to come back up!

You have been very busy over the last couple of years gigging all over the place. Has this been your most busiest period with gigs and tours.

Yeah we have kept busy that's for sure. I'm not sure if it's our busiest...we just keep the ball rolling and do as much as we can whilst juggling our day jobs and other important things in our lives...It can be very hard at times finding the balance and making it work. Probably the longest tour we ever did was 18 dates straight with Karma To Burn back in 2014...would love to do a long tour again sometime.

What have been your personal and favourite gigs over the years.

My favourite gigs over the years...hmm it's a tough one as there has been so many, I guess in terms of a huge crowd...last year at Bloodstock Open Air on the Sophie Lancaster (2nd stage). But we've had phenomenal shows at The Underworld in London, to great intimate squat party shows in Berlin...to house parties even, it's very difficult to pick, but I guess Bloodstock is my favourite!

I know that you do travel all over the UK. Is the UK Stoner Metal live scene in a good state of play or can promoters and bands do more to improve the scene in general. If so, what can people do.

The scene seems to be healthy...it's hard to judge, I mean so many promoters doing their bit and people like yourself that put in the effort to write about bands & shows is awesome and helps a lot...but then venue's closing can effect shows too. But lots of bands seem to tour here and do well, so I guess it's thriving! 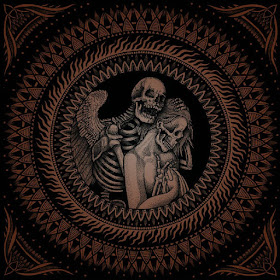 I know that Elliot and yourself still have your promotions company – Buried In Smoke. How is that going. Are you still actively involved with that. Do you still promote gigs on a regular basis. What have been your favourite gigs that you've promoted recently.

Yeah Elliot & I are still running Buried In Smoke Promotions...but less frequently. We just don't have the time and money to do it like we did before. So we just kind of pick the shows we really want to do! Not much coming up really other than the Desert Storm tour, Chron Goblin tour and Vodun Oxford show.

I'm gonna have to ask this question. New Album. Any updates at all. Can you share anything with your fans.

There really isn't a lot we can share at this moment in time other than we have the material written for a new record. Hope to have more news for the fans regarding this soon.

If so what can people expect from the new album. As you guys have changed your sound with your past couple of albums. Will you be changing your sound again.

As for the sound of the new album I'd say the materials certainly heavier, with more progressive / experimental songs. Some of it verges on post rock/metal...there is also elements of sludge and thrash...but all seems to groove and still keeps that Desert Storm sound.

Desert Storm will be celebrating their 10th anniversary this year. Did you ever expect that you would reach that milestone.

Yeah 10 years! crazy how quick it's gone. I think we all knew we would be together for a while as we're all old friends and basically still to this day enjoy jamming and writing music together. We've achieved a lot in 10 years! 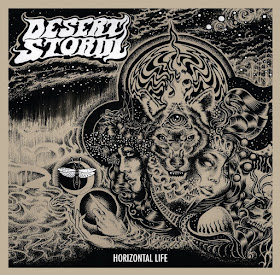 Will you be celebrating that milestone with a one-off gig in your home-town or favourite venue of some sort.

I'm not too sure about a milestone show...possibly, see how things develop later in the year, but right now I don't think so.

Looking back over that period, is there anything that you would change or do differently.

Looking back I don't think I'd change much...a few mistakes made working with certain people that were basically thieves...exploiting small bands that just wanted to make a name...luckily we sussed it out pretty quick and cut ties, this was quite a few years ago now...but there are a lot of assholes in this industry and you have to be careful at times. Other then that I can't really think of anything I'd want to change.

Thank you Steve, and thanks to all our fans for their continued support...hopefully be a new record in the not to distant future.

Well Ryan, thanks for doing this. All the best with the forthcoming tour.

See you on the road!