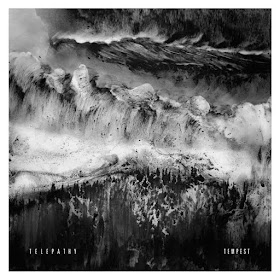 Telepathy's sophomore album - Tempest - is much more focused and heavier album than their celebrated debut album. Telepathy have a much more clearer vision for their music and I think that's down to their recent live performances on the International Stage with more of their esteemed colleagues. Tempest feels like a more personal album to the band as they create hard hitting emotional post-rock/post-metal passages.

Opening track - First Light is a sombre ambient/post-rock number that is merely there to create a haunting atmosphere for Telepathy to build their heavy progressive riffs upon. It's a beautifully played and delicate track which would have probably been better suited for the middle or near the end of the album.

Though no such worries with second track Smoke From Distant Fires as Telepathy dive straight into heavier psychedelic waters with post-metal sonic based noises that even give way to some progressive metal style theatrics. Telepathy merge the emotional post-rock delivery of Russian Circles with the heavier post-metal riffs of Pelican but still manage to create their own addictive sound. The drumming is frantic and impressive throughout with the excellent guitar work having a sludgier effect. The different noises that appear allow Telepathy to bombard the listener with different moments of pure chaos. You can hear a distinct Mastodon vibe when the album moves into heavier progressive waters.

Third track - Celebration Of Decay - offers a more bleak landscape as Telepathy build upon heavier post-rock/metal sounds with a slight depressing feel. The ambient noises played in the background maybe at a low volume but they add a menacing atmosphere as the band has created a multi-layered and highly complex album. The track truly comes alive when Telepathy slow things right down and let the post-rock vibe is the main driving force of the album as it has a more cinematic feel. The loud instrumental work prove how talented and forward thinking the band actually are.

Other songs on the album such as: Echo Of Souls, Hiraeth and Water Divides The Tide - bring a sense of foreboding Doom to proceedings. Sometimes primal, sometimes atmospheric but always brutal and magnificent with it’s delicately played balance of sound and vision. There are brief vocals that appear from time to time and that allows Telepathy to show people they can become something different other than an instrumental band if they ever decide to go down that route.

The production on Tempest is another highlight as everything sounds crisp and beautifully refreshing at times. Tempest is a concept album with its bleak themes mainly about humankind destroying the environment. Telepathy deserve all the plaudits coming their way for Tempest as this is an unstoppable take on all things Instrumental Rock/Metal and could end up as one of the year's if not year's best Post-Rock/Post-Metal albums.

Thanks to Magnus at Creative Eclipse PR for the promo. Tempest will be available to buy on CD/DD/Vinyl via Golden Antenna from March 31st 2017.