A Fan's Perspective - An Interview With HEDDBUZZ

It’s been a long time since I’ve done another “Fans Perspective” interview. I’ve decided to do another edition and this time I’m interviewing one of my biggest supporters since my Sludgelord days and a “real” Doom/Stoner Metal fan by the name of HEDDBUZZ.

You may have seen HEDDBUZZ posting on BandCamp when buy albums from different artists and even leaving comments on the Outlaws Of The Sun Facebook Page.

HEDDBUZZ is a well known and well respected supporter of the Doom/Sludge/Stoner Metal underground. So I had to interview HEDDBUZZ and see where his passion for music started from and what he thinks about the scene overall.

Here’s the interview that I did recently with HEDDBUZZ.

Hi Heddbuzz. Thanks for doing this interview. Hope things are OK with you today?

I can't complain at all my man. I'm actually feeling pretty good for my age these days. At least I think I do. I guess I don't really know how I'm supposed to feel, but it's not that bad, all things considered. Not as bad as I thought it would be anyway. Thanks for asking though, I hope you're doing damn well yourself.

You’re probably wondering why I decided to interview you. I wanted to try doing something different from the usual round of interviews. I want to talk to a real fan from the Doom/Sludge/Stoner Metal community. Get their thoughts on the scene in general. And you’re quite well known within the scene. As you’re an active supporter of almost everything Doom/Sludge/Stoner Metal related?

Well, now that you mention it, I was wondering. What the hell? You approaching me about it was really unexpected. A newspaper reporter for years, I'm not used to being interviewed at all, but I'm happy to do it for Outlaws of the Sun. It's not like anyone's gonna see this interview, let alone read it, right? Joking Steve, I'm totally kidding. I know lots of folks check your blog, including myself. I'm honoured to answer some questions for ya. I think I qualify as a real fan from the doom, sludge, stoner metal community. As far as being well-known, well that's news to me. but I certainly confess to being an active supporter. I try my best.

How did you become a fan of the Doom, Sludge and Stoner Metal scene?

I guess I became a fan of this current scene by way of the inter-webs. I mean, I was already a fan of bands like the Melvins, Electric Wizard, Eyehategod, Bongzilla, etc., before I had the internet but once I fully got online all hell broke loose. It was maybe 2011 when literally Googled 'stoner metal' download - or some shit like that - and found a blog much like your own. I think it was called Stonerrobbixx or something similar. Anyway, there were free downloads or links these stoner bands I'd never heard before, and found bands like Belzebong, Beast in the Field and Sardonis. Bongripper. I remember those distinctly because I'm a huge instrumental fan and often times I would seek that out specifically. 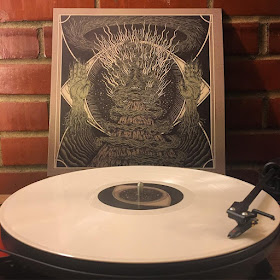 Which bands did you start supporting or following first?

Those are the bands I started following first. Unfortunately 2 have since split and only Belzebong and Bongripper are still writing and recording new material. I think Belzebong is anyway - haven't really heard any news recently so don't quote me on that one ha ha. I hope the band records another album. Thankfully, Bongripper shows no signs of slowing down and gets better with each new album, to me anyway. I was very impressed with the new LP, 'Terminal'. Just wish I could see a live performance by the band.

Do you still love these bands to the current day. Who are your favourite bands/artists to listen to this day?

Of course I'm still listening to the Melvins. I may not always like what I hear these days, but I still listen. I suppose I always will, for as long as my hearing holds out. When all else fails, Melvins. That's what I say. Hell, I'd better listen to the band. My damn license plates on my truck say MELVINS. My car says SNIVLEM. The hat I wear to work says MELVINS. I think you get the point. 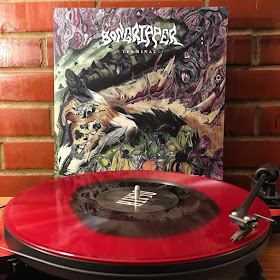 In your own words what’s it like being a fan in today’s Doom/Sludge/Stoner Metal community?

I think this scene for heavy underground music is amazing and I've had a blast for years now. Maybe that's what is keeping me from feeling my age. It's gotta be the music. I've met so many like-minded people - fellow fans and musicians - from around the world, that it blows my mind sometimes. I don't know many people in my personal life who even listen to metal, let alone underground stoner metal. So to me this scene and my time in it has been awesome - and always will be.

Any advantages or disadvantages supporting the music we love and know?

The only disadvantage - besides to my bank account - I find is trying to keep up with everything. In all honesty, I just can't. There's just too much great music released every month it seems. Hell of a problem, huh? Ha-ha. Hate to cry about it but it's true. I don't really look for new music like I used to though and I listen to much more metal than I do rock. More than 5 years ago, it was the opposite. Seems like as I age, I want my music a lot heavier and I've become much more tolerant with unclean vocals.

You’re very active supporting a high amount of bands and blogs within the community. Do you find it a struggle keeping up with everything. Or do you have your favourite websites to find the latest news and reviews?

Bandcamp is my main source for new heavy underground music. I follow a lot of bands / labels and sometimes I'll use their search features if I have time. It's great because I can search by format, genre, location, or maybe find out the best-selling or newest releases. I've found so many great albums there - a big part of my physical and digital music collections comes directly via that website. It can take some time screening through stuff that might not be so great, but it 's worth it when I find a tune that makes the hairs on my arm stand up.

What is your preferred choice of listening to music. CD, Digital, Cassette, Vinyl, Mini-Disc?

I buy mostly vinyl but I always appreciate a digital download to accompany the physical format. To me it's all about location, location, location. At home I'm spinning vinyl most of the time or I may be streaming a new album (via Bandcamp). I don't use any streaming services and I play CD's in my older vehicles. Because they're old. If I'm out and about the air pods are thumping in my ears. I recently starting buying a few more cassettes and broke out the old Sony Walkman. Cleaned it up at bit and damn if it doesn't still work perfectly. 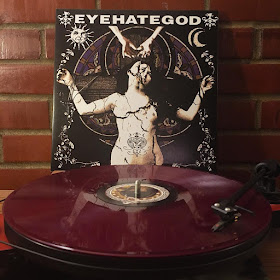 You’ve been to a lot of great gigs over the years. What have been your favourite gigs that you’ve attended?

You're right, I have been to a lot of great gigs. Thirty years worth is too many, according to my annual hearing tests at work. I don't know if I can name a greatest, but seeing Sleep for the first time this year was pretty damn epic. The Melvins with the Big Business line-up comes to mind. Those albums are some of my favorite of all-time by the way. This year has been one of the best in recent memory when it comes to live performances. Melvins, Sleep, Yob and Ufomammut gigs already under my belt. Gonna catch In the Company Of Serpents at the end of the month. Big Business later in the fall.

You’ve been a major supporter of many of the great indie labels within the Doom, Sludge and Stoner metal community. Which labels do you like dealing with the most and what do you feel these labels bring to the overall scene?

When I'm not buying DIY albums, I do have a personal favorite record label, and it's mainly because it physically released some of the first digital music I found in the underground. That label is Emetic Records, based in the USA. That's where I found 'The Great Barrier Reefer' by Bongripper and 'Sonic Scapes & Weedy Grooves' by Belzebong on vinyl. But if that wasn't enough, it's where the official Eyehategod and Church of Misery merch is sold. And every once in a while,

I'll get turned on to a new band like Celophys - a sick 2 piece from the Ukraine. It's been my go-to label for a long time, actually. Emetic is legendary to this guy.

I know you have your normal daily life to contend with. Family and your job. How hard is it for you to listen to music?

Finding the time for music isn't hard at all these days, now that I'm older and much more stable financially, especially. My kid is grown and I'm single so that helps. Music is a big part of my everyday life. Every day. If I'm not working or sleeping, I'm probably listening to music or have been very recently. Or I'm going to be very soon. It's always been a huge part of my life, for as long as I can remember, and I don't expect that to change anytime soon.

Well Heddbuzz. Thanks for doing this interview. Much appreciated?

No problem Steve, thanks for the opportunity to share some of my hazy thoughts. Think anyone will actually read them? I'm kidding!! I'll read them. Here's to another great year in the underground my man! It's been great getting to know you over the years! Stay heavy! Peace.

Words by Steve Howe and HEDDBUZZ