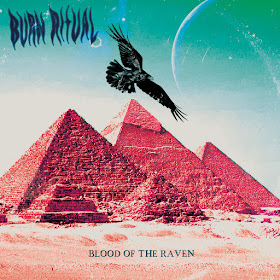 
Blood Of The Raven – Tracklisting

1.The Mirror
2.Blood of the Raven
3.Repent
4.Mountain of Smoke
5.The Creature Inside You
6.Follow Me
7.Cast Away

I will admit that I am a sucker for a good doom record. With so many coming out these days, it is sometimes a bit tougher to find than one may think. Some doom records have a tendency to drift toward being overly repetitive and monotonous. So, it is with great pleasure that I gave a listen to the first full length album from Burn Ritual. The band hails from Texas and is the brainchild of main Ritualist Jake Lewis. Blood of the Raven follows the band’s impressive debut EP, Like Suffering, which was an all to brief slab of heavy doom that was performed almost entirely by Lewis.

Blood of the Raven has Burn Ritual as a full band with Lewis at the helm handling the vocals, guitars, writing, recording, and artwork. An impressive feat to say the least. The seven tracks on Blood of the Raven are concise and rocking. The vocals have an Uncle Acid feel about them and the music is straight ahead, in no way tedious, and carries an old school doom vibe throughout.

The album opens with The Mirror that has the slow, traditional doom rock opening but the chugging riff carries the song into a rocking, more uptempo (but still doomy) jam. The title track Blood of the Raven follows with a super strong groove and a nice heavy riff. Another stellar track is Repent. This song continues with the wicked riffs, while being driven by some killer drumming and the emergence of a little synth work to keep things interesting. It isn’t too hard to figure out what the killer Mountain of Smoke is an homage to, but it is nonetheless another monstrous doom driven track.

The truly interesting The Creature Inside You follows. It is a bit of a departure from the rest of the album, as it is a slower, sombre bit of meditation with some pronounced maraca based percussion that gives you a couple moments to either chill or be creeped out, whichever is your persuasion. Follow Me comes driving in with a big, nasty, aggressive riff to drive things home before the closer comes in. Cast Away brings the heavy bass and a ton of feedback that leads to a big monster riff and an ultimately satisfying ending.

Blood of the Raven is a monstrously good record and with it Burn Ritual has emerged as one of the brightest newcomers to the doom genre. I’m not sure if you are supposed to be optimistic when it comes to doom rock, but I am truly look forward to what these guys have coming in the future. I am down with this ritual. Check them out and Dig on it! Highly Recommended.