An Interview With Mike Cummings From BACKWOODS PAYBACK

Backwoods Payback have been going as a band since 2003. 15 years later the band are about to release their best album to date with Future Slum.

I caught up with Mike Cummings (Vox/Guitar) from the band where we discussed the evolution of the band and the making of their new album.

Hi Mike. Thanks for doing this interview. How are things with you today.

Before we discuss your new album. Can you give a brief overview of how the band formed and where it is today.

The band started 15 years ago. I made a demo of some songs I had kicking around that didn’t really work for the band I was in at the time and gave it to some friends to see if they wanted to jam sometime. They dug what I was thinking and we went from there. 6 albums and countless tours later and here we are. Been kind of nuts


How would you describe your overall sound. As you have included quite a few different elements for a seedy and heavy sound. Especially on your excellent new album.

Thanks man, we are really excited for this new one. I don’t really know how to describe the overall sound. I always felt like we don’t really fit into any one scene, which is good at times but makes it a little harder at others. HEAVY is probably the one word I could describe is with. 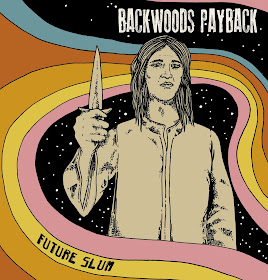 You’re about to release your superb album – Future Slum. What can people expect from the album.

I think this record is the next evolution of our band. It’s streamlined in some ways, it’s massive and expansive in others. It’s honestly the best thing I have ever been a part of.

What is the main theme of the album and why did you call the album Future Slum.

The album revolves loosely around the concept of feeling lost, disenfranchised, and not fitting in. So you go searching, find some people, join up and....it’s up to the listener to decide where they end up.

Future Slum is a the place any of us are standing, living, breathing at any moment. No matter where you may think you are, it’s just a future slum.

We reaches out to a number of labels and folks but couldn’t really find a home for this one. We are doing everything ourselves. I grew up in the punk/hardcore scene (as did Erik) so this is really all I know. When no one will help you, you do it yourself.

The album will be released on August 3rd on vinyl, CD, and all digital outlets. 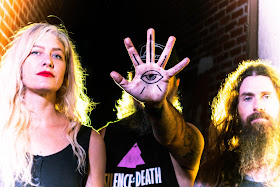 I was writing a lot of it around the 2016 elections, so that feeling of waking up and not really understanding how this could happen came into play for sure. I’ve also always read heavily about cultural movements, sects, cults etc. Those themes have never made their way into the band however so this was a first. It just kind of all started to come together.

It was painless. We went into the studio the week we got off the road with Royal Thunder and I feel like we were at the top of our game playing wise. Our ideas were flowing and we blinked and were done.

You’ve been together as a band for 15 years now. Did you ever think back then that the journey would last this long.

HA HA, man I didn’t think this would last through a few shows. I was so burned out doing the band I had before this. It was feeling like a chore, so with Backwoods Payback I said “let’s not try, let’s just play and vibe and see what happens”.
And here we are...had a lot of highs and a ton of lows but we are still here.

Would you change anything at all that you’ve been through with the band. 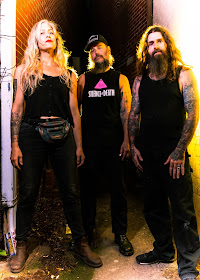 I usually end up bringing song ideas to practice and showing everyone what I’m thinking. Everyone kind of vibes on their own thing so we tend to work well with each other. It’s funny though, 9 out of 10 times the rough riff type demos that I give Erik and Jessica end up being just about how I imagined the finished song to sound. I think we are just in that phase of writing to each other’s strengths.

You have a US Tour coming up within the next few weeks. What can people expect from these shows and will you be performing other dates later in the year. Or will you just be focusing on gigs closer to home.

We just did a run of shows in the North-east and will be heading south for a few after the record is out. Our plan as of now is to do a few more regional runs in the early fall and then a US tour in November.

Are there any plans for you to come over to Europe in the near future.

YES! Since playing last year at Roadburn and Desertfest we have been planning our return. Hoping for early 2019 if all goes as planned!

Thanks for vibing on it and spreading the word man. It’s been a long time of wandering out here, it feels good to know that folks are getting it. See you all on the road....no sense makes sense.

Thanks to Mike for doing this interview. Thanks to Curtis at Dewar PR for arranging the interview. Backwoods Payback is now available to buy on CD/DD/Vinyl now.