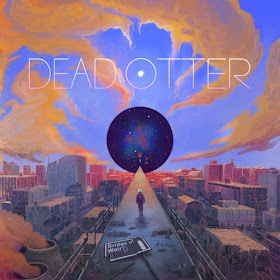 Dead Otter’s debut album – Bridge Of Weird – is a slice of psychedelic/space rock weirdness with the band creating a very different and surreal style of Stoner Rock. The music is very jam based at times and the album has a looser flow and structure compared to other Space/Stoner Rock albums that I’ve heard recently. Though Dead Otter become a heavier band when the heavier psychedelic riffs are in full flow.

Opening song – Eye Elevator – is a very intriguing song with Dead Otter moving from one form of psychedelic rock to the next. There are even moments of Post-Rock interludes within this song that gives this song a haunting and emotional edge. If you dig bands such as Hawkwind, Monkey3 and Monomyth then Dead Otter will be the band for you. As they have a similar style of music as those great bands.

Second track – Waning – is a more calmer affair with the band playing a slower style of Spaced Out Riffs. Though that doesn’t stop the band by adding elements of Stoner Rock at different parts of the song. The groovy guitar sounds leave you in a tranquil state. The song would have been more exciting if the band played a faster and heavier style of music. Though I have a feeling this song will become one of my favourites tracks to hear on the record in the near future.

Third track – Fur – is a 30 second interlude with the familiar sounding riffs. It’s nicely played but it doesn’t bring anything new or exciting to the album.

However the final two tracks – LV-426 and Bridge Of Weird – is where Dead Otter impress the most as they play the heaviest moments on the album with LV-426 being one of the best songs on the album. Named after the planet from the classic movie – ALIEN. This song has a more doomier aspect compared to the other songs on the album and the Classic 70s Prog Rock guitar solos allow Dead Otter to play a more experimental style of music.

The final epic song – Bridge Of Weird – is an almost 14 minutes song and is perhaps the centrepiece of the entire album. As the song drifts from Classic Rock, Stoner Rock, Psych and Space Rock and still sounding very different as well. Maybe it’s the Post-Rock interludes hidden in the background that sees Dead Otter leave you richly rewarded and wanting more.

It’s a shame the album is on far too short running under 35 minutes. However with that being said, The Bridge Of Weird is a superbly entertaining album and should have you coming back for non-stop repeated listens.