An Interview With Jack Sutherland From HAAZE

HAAZE are a Sludge/Doom Metal band from Red Deer, Alberta, Canada. The band will be releasing their debut album – SWAMP MAMA – in January 2019.

Swamp Mama is a heavy collection of bleak Doom and Sludge Metal sounds. What makes this band standout is their use of other elements such as Drone and Death Metal to give their debut album an unforgiving and cold feel.

HAAZE are a band to look out if you like your music BRUTAL and LOUD.

I’ll be reviewing their debut album in the next few weeks.

To find out more about the band, I caught up with Bassist Jack Sutherland from HAAZE.

Hi Jack. Thanks for doing this interview. How are things with you today.

Doing good! Thanks for asking.

Before we discuss your new album. Can you give a brief overview of how the band formed and where it is today

Formed from a disbanded band in Mitch’s basement, writing riffs and laying down lyrics.

How would you describe your overall sound. As it’s a distinctively heavy blend of many different musical elements.

It’s a very groove oriented sound with notes of doom, hints of death and a sludgy afterbirth that will leave you liking your lips for more.

You’re about to release your superb album – Swamp Mama – in Jan 2019. What can people expect from the album.

It will leave you sore and begging for more, even your dog will hate you ha-ha. We’re really proud of how it turned out and contains some of the best writing we’ve ever down.

We really influenced each other. Our individual tastes differ and from the whole excitement of the process all of those influences complemented each other in a very collective way. From slam to punk, hardcore to death metal and everything in between.

It was a fun experience. We did most of it live off the floor and Ranjit really helped streamline the process. It was a real pleasure working with him and hope we can do it again.

You’re from Red Deer, Alberta. How would you describe the underground Metal scene in your home-town.

There’s a lot of punk and hardcore, and the kids go crazy for metal over here

Can you recommend any other Doom/Sludge Metal bands from your home-town or surrounding areas that people should check out.

Get some Highbernation in ya, quick. 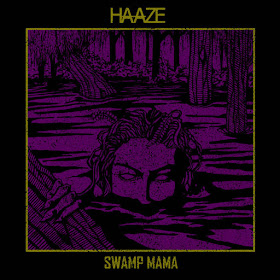 It’s really a collaborate effort from everyone in the band. Mitch will send us riffs and at jam magic happens. Everyone has their input and whatever noises we make is really unique to us. We wanted this album to catch your attention and be as hard hitting as possible

Which bands or musical artists made you decide or influence you to become a musician or pick up a musical instrument.

Steve Harris got me on the bass

What is your musical setup when playing live or recording in the studio. Do you have a basic setup or advanced setup.

As a bass player it’s straight to the point, overdrive pedal and that’s it

With 2018 almost drawing to a close, what have been your favourite albums you’ve listened to this year.

Been hitting up Aversions Crown, Shadow of Intent and the Beaches quite a bit, still can’t get enough

A big thanks to all the fans for sticking with us and supporting us along the way, can’t wait for everyone to hear what we made for them. Find us on Facebook, Instagram, Spotify, ITunes and check out our pre-orders on BandCamp.

Thanks to Moshpit Promotions for arranging this interview. Swamp Mama will be available to buy on DD/Vinyl via Transistor 66 Records from January 1st 2019.