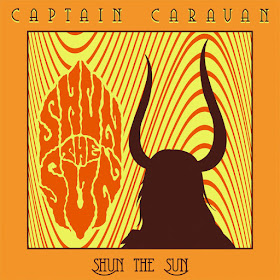 Captain Caravan are a band who are heavily influenced by Seventies Classic Hard Rock/Doom Metal with a huge Desert/Stoner Rock vibe being part of their overall sound. Their debut album Shun The Sun takes influences from bands such as Led Zep, Sabbath and Kyuss with the band trying their hardest in creating a top-notch vibrant sound.

Opening song – Crown – moves from Psychedelic Stoner Rock, Classic Rock and Desert Rock with relevant ease with the band having an easy-going charm to their music. The riffs are a mixture of old-school grooves and more modern sounding Blues/Stoner Rock vibes. Throw in a few elements of Progressive Rock and Captain Caravan have a deep passion for everything loud and heavy. There is a high amount of guitar solos on this song and that is no bad thing especially when you play the music very loud. The vocals from Johnny have a slight Blues Rock twinge to them and the vocals match the riffs superbly well.

Second song – Illusion Of Meaning – is one of the albums heaviest songs with Captain Caravan playing a more direct Stoner Metal sound. The song has quite a gloomy feel with the atmosphere becoming quite bleak at times. Though the song still has elements of Classic Hard Rock/Metal to give the band a more threatening edge and they play this song with a wicked sense of confidence.

Third song – Shun The Sun – opens with a slow-paced riff that builds up to a heavier psychedelic sound and the band becoming more confident with the heavier aspects of their music. This is perhaps lead singer’s Johnny best performance on the album. As it’s quite dynamic, as you can feel the passion and anger in his voice. The music is another psychedelic trip with the band playing one of the albums standout songs.

Fourth song – Godkiller – is an acoustic song that has an Alice In Chains feel to it especially with the gloomy vocals and heartfelt music.

The second half of the album goes even further into the Doom/Stoner Metal spectrum with songs such as Zombie Machine, Shadow King and Book Of Oblivion being a stark contrast to the opening songs. As Captain Caravan become a different band as a result. The music even has aspects of Grunge starting to appear and the listener will have some great enjoyment trying to figure out which musical direction the band will go next.

Shun The Sun is an expertly produced album with the band sounding very powerful from the start. The music is constantly loud and engaging and will have music fans on the edge of their seat.

Captain Caravan will be releasing this album on vinyl next year via Cursed Tongue Records (Awesome label started by an ex-writer of the blog) and it’s a match made in riff heaven. As CTR are one of the most dynamic labels that have emerged over the last couple of years with some epic releases to their name. Shun The Sun will no doubt fit right at home to the more established bands the label currently have on their roster.

Overall, Captain Caravan have delivered a brilliantly heavy album that’s not afraid to take genuine creative risks and that’s what makes this album so good. You never know what to expect and I want to see which musical direction the band will take in the next few years. Check this band out now as Shun The Sun is a must-have and powerful sounding album.