The Necromancers - Of Blood And Wine (Album Review) 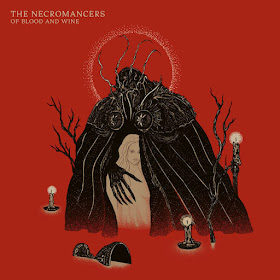 Of Blood And Wine – Tracklisting

The Necromancers second album Of Blood And Wine continues their highly progressive sound against the Doom/Stoner Metal spectrum with heavy touches of NWOBHM. The album has real flair for 70/80s classic heavy metal sounds but with a more leaner modern sound. That’s a very hard combination to pull off but The Necromancers do this with relevant ease.

This album shouldn’t really work as the band never stick to one sound. They could have easily confused the listener but to the band’s credit they create a dynamic and powerful release where all the songs all sound very different to each other.

The album is very OTT and dramatic in various places but that’s what gives The Necromancers their well deserved reputation within the scene. As the band have their own vision and are not afraid to experiment with their own sound but also what people come to expect from Doom/Stoner Metal in general.

Opening song – Join The Dead Ones – has a retro Doom/Occult sound though the band play a more progressive hard rock sound towards the very end. The instrumental work is very gloomy and lives up to the Occult Rock/Doom Metal aspect of the band’s overall sound.

Second song – Erzebeth – is a 13 minute epic that plays out like a mini Doom/Stoner Rock opera. This is definitely the standout song on the album. This song gives the album a more old school Doom Metal feel and equally a more modern Stoner Metal vibe as well. The dual guitars smacks of Thin Lizzy/iron Maiden TWIN GUITAR worship and that’s no bad thing in my book.

Third track – Of Blood And Wine – is a gloomy acoustic song which shows a different side to The Necromancers. The song has a slight Folk Rock vibe which has quite an emotional edge. Shame it’s on the short side as I was really digging this snog before it abruptly ended. I would like to see the band explore this kind of music further on future releases.

The second half of the album is equally as good as the first half. The standout songs have to be Secular Lord and The Gathering. As both contain an epic gloomy landscape within them.

Overall this is another highly majestic release from both Ripple Music and The Necromancers. This is still The Necromancers show and they prove this album they have a real creative dynamic flair that you don’t hear from many bands today.

Thanks to Richard at Sheltered Life PR for the promo. Of Blood And Wine is available to buy on CD/DD/Vinyl now via Ripple Music.