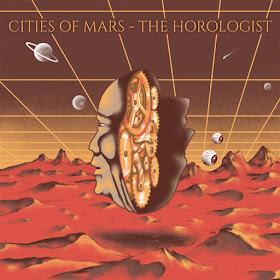 The Horologist is the second album from Swedish Progressive Doomsters – Cities Of Mars and there first album for Ripple Music after moving away from Argonauta Records. This album is very similar to their debut album Temporal Rifts for the early stages of the album. However, Cities Of Mars actually go under a “mini” transformation for the second half of the album though more about that later.

The album opens with Necronograph and it’s a heavy progressive doomed out affair with elements of Mastodon and CONAN psychedelic sounds. The vocals are excellent and perhaps even a step up from their debut album. The song moves from Doom/Stoner Metal vibes to heavier atmospheric sludge towards the end of the song. This allows the album to have a mature Post-Rock/Post-Metal sound.

Second song – Trenches Of Bah-Belon – captures the whole new sound that Cities Of Mars are striving to aim for with slow-paced Psychedelic Sludge/Post-Metal grooves. The lyrics and vocals can be quite cold at times but that matches the whole gloomy outlook the band are aiming for. The music can be very trippy and surreal at times. However, it’s a well-balanced approach with Cities Of Mars impressing more so than their debut album.

Third song – Inner Sanctum Outer Space - carries on the heavy Space Rock/Trippy theme that’s been part of Cities Of Mars DNA since their debut EP- Celestial Princess. The music is slow, direct and heavy with a purpose. The band start adding new sounds to this song which we haven’t heard from them before. So expect a more experimental approach on this song. The song still has its fair share of Sludge/Doom/Stoner Metal riffs that leave you wanting more.

Fourth song – Hydrahead – is a more Sludge/Post-Metal driven song with Cities Of Mars opting for a more raw sound compared to other songs on the album. The psychedelic sounds are some of the strongest parts held on the album with the band adding a more straightforward narrative as well. The vocals are good for the most part of the song. Though sometimes they’re drowned out by the constantly heavy progressive riffs but’s part of the overall idea of the song.

The second half of the album is where Cities Of Mars start to experiment with their overall sound more by adding wonderful sounding psychedelic noises and playing a heavier style of music especially on songs such as: The Last Electric Dream, The Floating Museum and Lines In The Dark. I admire Cities Of Mars decision to experiment with their sound as it’s constantly thrilling and engaging to listen to.

I will admit that I felt slightly disappointed by this album when I first listened to it. As I thought the band were trying too hard and including different ideas that wouldn’t work especially compared to their excellent debut album. However, the album made slowly made a lasting impression with me and in perhaps the second half of the album most of all. As it sounds so different for what Cities Of Mars are known for. The vocals may not be as strong but the music remains a thrilling experience to listen to.

The Horologist is a welcome addition to Cities Of Mars already impressive discography and leaves you wanting more. The production is excellent and is perhaps the best Cities Of Mars have sounded yet. This album is very different to Temporal Rifts but one that will speak volumes to their established fan-base and perhaps allow Cities Of Mars to enhance their reputation further within the global Doom/Sludge/Stoner Metal scene

Thanks to Richard at Sheltered Life PR for the promo. The Horologist will be available to buy on CD/DD/Vinyl via Ripple Music from April 5th 2019.