No Man's Valley - Outside The Dream (Album Review) 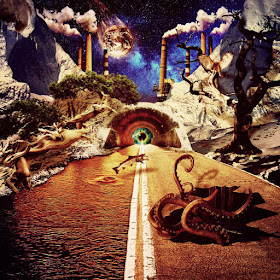 Outside The Dream – Tracklisting

Outside The Dream is the new album from Psychedelic Desert Rockers No Man’s Valley and it’s an intriguing and very interesting affair from the start. As the band play a different style of Desert Rock that includes elements of Psych Rock, Classic Rock, Prog Rock and Stoner Rock. The album is firmly rooted in 60s and 70s Hard Rock and has a slight All Them Witches influence.

The songs have a dreamlike and volatile state in their DNA and it makes for some killer riffs throughout the album. The band are very hard to describe and the album can be very hard to listen to at times especially on your first listen. As the band include many different sounds from the Psychedelic realm. The vocals feel they’re being channelled from another dimension and the swirling Desert Rock vibes only add to the glorious confusion of it all.

Songs such as: Outside The Dream, Eyeball and Hawk Rock – gets the crazy psychedelic and progressive party started with a constant supply of trippy sounds that lead to some FUCKED UP DARK MOMENTS that even I didn’t expect. No Man’s Valley are truly an original band with their own trippy sound and demented vision. Though the album has it’s fair share of lighter moments as well.

Other cool songs to experience are: From Nowhere, 7 Blows and Murder Ballad. As these are the songs where No Man’s Valley show the most creativity with their music by constantly changing their overall sound and writing great lyrics to match.

If you’re a fan of All Them Witches and The Doors the No Man’s Valley are the band for you. Though expect these guys to go that little bit out there with some hard-hitting and complex themes contained on the album. Overall, Outside The Dream create a dynamic and powerful sound that sees No Man's Valley rise above the competition with this fantastic album.