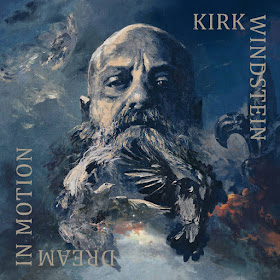 1.Dream In Motion
2.Hollow Dying Man
3.Once Again
4.Enemy In Disguise
5.The World You Know
6.Toxic
7.The Healing
8.Necropolis
9.The Ugly Truth
10.Aqualung

Legendary musician Kirk Windstein debut album Dream In Motion is quite different to his work with his legendary groups such as Crowbar, DOWN and Kingdom Of Sorrow with the album being influenced by Seventies Prog Rock, Hard Rock and Heavy Metal. The album is also more reflective with Kirk writing some of his most personal lyrics and music to date that allows Dream In Motion to have a more sombre atmosphere that you would originally expect.

Though that doesn’t mean Kirk has diverted from his trademark Sludge Metal grooves. Far from it. This album does feature a high amount of Sludge/NOLA based sounds but there dialled back a bit and the album feels more emotional at the same time. I always worry when Sludge/Stoner Metal musicians decide to release solo albums. As they always tend to be far removed what the person is known for and mainly be “Country” or “Americana” inspired albums. Most of those albums don’t impress me but I have no issues with Kirk’s debut solo album. Dream In Motion is a full on Hard Rock/Sludge Metal album with a few surprises along the way.

Opening song – Dream In Motion – opens with Kirk’s trademark “NOLA” groove before moving into Progressive/Classic Rock territory with a distorted Psychedelic edge. It’s a different style of music from Kirk but also one that has an air of familiarity as well. Kirk’s vocals are passionate and quite aggressive in places but still allowing Kirk to try his hand at different styles of music. The lyrics are excellent that impressed me from the start. The NOLA influence goes into Seventies Prog Rock overdrive but you are treated to some epic guitar riffs along the way. The song perfectly shows you how the rest of the album plays out.

Songs such as: Hollow Dying Man, Once Again and Enemy in Disguise allows Kirk to create a world-weary Psychedelic and Gloomy sound with a Post-Doom atmosphere being played on the opening stages on most of the songs. The most impressive about this part of the album is how comfortable Kirk is playing these different styles of music. Long-time fans of Kirk maybe disappointed at first to hear the album and it does take a few listens to fully come on board with the less aggressive style of music that Kirk is known for.

The later stages of the album are perhaps the best moments of the album with Kirk showing a fine ear for creative detail with the music and lyrics combining for a haunting and original style of their own. The most surprising thing about this album is the cover version of Jethro Tull classic – Aqualung – on this album. As it’s quite different to the original though Kirk still retains the dark experimental tone that appeared on the original version.

Kirk has been in the music business for over the last thirty years or so and is very much part of the fabric of the NOLA Sludge Metal scene. His influence can be heard in countless bands across multiple generations. I hope Kirk will release many more solo albums in the future as Dream In Motion is a super fresh record with a lot to say and I want to hear more of this style of music from Kirk.

Dream In Motion is a welcome addition to Kirk’s already impressive and legendary output of material.

Thanks to Carl at Action PR for the promo. Dream In Motion will be available to buy on CD/DD/Vinyl via eOne Music from Jan 24th 2020.