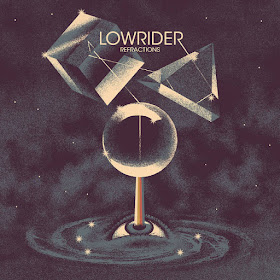 Seminal Psychedelic Doom/Stoner Rockers – Lowrider – have finally released their eagerly awaited second album Refractions and twenty years after their celebrated classic debut release - Ode to Io. The band did go on hiatus at the turn of the century and reformed 2013 to rapturous approval from the Stoner Metal community. It was only a matter of time that Lowrider came back with a new album and this is the main event.

Lowrider take a more cerebral journey with Refractions and inject a trippier style of Doom/Stoner Metal that takes their music into the realm of Spaced Out Cosmic Rock. Their trademark Desert/Stoner Metal riffs still remain but the band play a more grown-up sound that allows them to experiment with their music compared to their debut album.

Opening song – Red River – is a mixture of Psych Rock, Desert Rock and Stoner Rock which has a slightly early-Kyuss influence that Lowrider soon allow their Psychedelic creative juices take centre stage with classic sounding Desert/Stoner Rock vocals to match. The song moves into more “Monolord” style territory on the second half but Lowrider still manage to play their own blend of heavy addictive riffs that have an original vibe of their own.

Second song – Ode To Ganymede – is one of the best songs on the album with Lowrider showing the world what QOTSA would sound like if they didn’t go down the commercial rock route of recent years. The song is unexpectedly quite aggressive which allows Lowrider to play a more direct blend of Psych Rock and Stoner Metal that sees the band move into style of music that we haven’t heard them play before. The epic sounding Psychedelic Guitar solos is what make this song truly standout with a Spaced Out influence running freely for everyone to hear and fully experience. The organs are another cool touch which adds more substance to Lowrider’s overall sound.

Third song – Sermanders Krog – allows Lowrider to embrace their “Prog-Rock” influences even further with the band playing a more distinctive style of Psychedelic Stoner Metal with strands of Desert Rock leading the way. The song takes you on many different paths as Lowrider don’t stick to one conventional route. The song is quite challenging and creative in places but still equally and wildly addictive. This is one of the standout songs on the album and has a timeless sound to it all. The instrumental work is epic as they come with excellent vocals leading the way.

The second half of Refractions impresses even further with Lowrider leaving the Progressive Rock influences behind on the next two songs – Ol’ Mule Pepe and Sun Devil/M87*. The songs still have its fair share of Cosmic vibes but it’s more down-to-earth Desert Rock/Stoner Metal that the band first made their name with.

The final song – Pipe Rider – is the final song and don’t Lowrider leave the best song till last with an eleven minute plus Prog Stoner Rock/Metal odyssey that has many hidden surprises along the way. Lowrider could have easily lost their way with the many different sounds and ideas contained on this song. Though, to their credit Lowrider manage to keep the mood vibrant and most of all, original in their own unique way. The psychedelic and trippy interludes have the perfect balance of Heavy and Light Progressive moments that sound EPIC in every way possible. Fans of Monolord and Ufomammut will sure get a kick out of song especially when the heavier spaced out riffs appear. Though the vocals and lyrics are what make this song work so brilliantly well.

This is perhaps the best Stoner Metal album I’ve heard since SLEEP's comeback album The Sciences. Refractions is brilliantly produced and what makes this such a classic sounding album in its own right. Lowrider may have delivered the Stoner Metal album of the year.