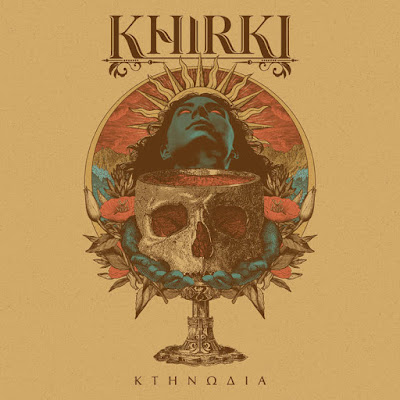 KHIRKI are a Sludge/Stoner Metal Band that brings a lot of manic Folk Metal energy to their debut album Κτηνωδία (pronounced "Ktinodia"). The PR sheet that came along with this album advised the band will appeal to fans of High On Fire, Mastodon, Kvelertak and TOOL. Whilst not sounding exactly like them, KHIRKI do have sparks and outbursts of energy from those great bands. The album is quite varied and interesting with it’s different approach and that’s down to the Anatolian and Balkan folk music KHIRKI have brought to this album.

The song is quite funky, progressive and upbeat in all the right places and you feel that from the excellent two opening songs - Deadpan and Black And Chrome - which allow KHIRKI the opportunity to fully get in their creative groove early on the record. There is a similar “Kvelertak” feel on these two songs with how the music moves into different directions and genres.

The rest of the album does offer a more “Progressive” and “Heavier” flavour with a sense of modern “Radio-Friendlier” elements that Mastodon have used recently for their last few albums. The Folk Rock outbursts can be quite topical in places on songs such as: Medea, Bukovo and The Barkhan Dunes.

The vocals from Dimos are clean-based and constantly engaging. He does bring a heavier and more aggressive presence on the record when the time calls for it which is helped along surprisingly well by upbeat and almost “Funk” based grooves but still remaining in the Sludge/Stoner Metal field.

The production is handled superbly well and allows  everything to move along at a cracking pace with a warm sounding atmosphere and environment for KHIRKI to make themselves known with.

If you’re on the lookout for a different style of Sludge/Stoner Metal and missing those “Kvelertak/Mastodon” Progressive ideas and themes then KHIRKI will keep you entertained with their spellbinding debut album.