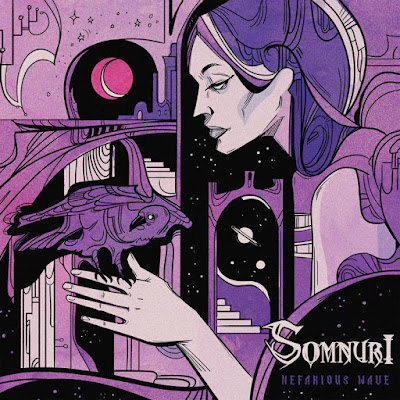 5.Watch the Lights Go Out

Somnuri impressed me greatly when they released their self-titled debut album back in 2017. The band showed their creative might and worth with their blend of harsh Sludge/Doom grooves and upbeat Psychedelic Stoner Metal sounds. The band drew comparisons to bands such as High On Fire, Torche and Mastodon.

Fast forward 4 years later and Somnuri have returned with their new album Nefarious Waves. This record has a much darker and threatening feel to it with the band starting the album quite gloomy with the Sludge/Doom Metal riffs and breakneck vocals building a well-crafted sound.

Opening song - Tied To Stone - is a bombastic mix of Sludge/Doom Metal sounds and harsh vocals with Somnuri adding clean and upbeat moments to their music. The clean and harsh vocals are mostly separate on this release and allow the listener to get the full “DARK vs LIGHT” approach Somnuri have adopted for this record. The Psychedelic elements just draws you in with the band bringing a dark High On Fire progressive feel to the record.

Second song - Tooth & Nail - is the kind of Progressive Sludge/Stoner Metal that I find the most refreshing to hear and experience. This has that manic early energy that “Mastodon” launched their careers with but Somnuri brings their own cool creative touch to the party. Fast-paced hardcore beats and thrilling Psychedelic moments just have the right EPIC feel despite the trappings of the short 3 minute plus running time of the song.

Third song - Desire Lines - offers the perfect 90s Grunge/Alternative Rock balance with a daring Post-Doom groove that is one of the standout songs on the album. The instrumental work is quite daring especially when Somnuri brings different styles of Psych Rock/Metal into the mix. The vocals have echoes of classic “GRUNGE” which move from upbeat to a more sombre tone. This song has quite a “WOW” factor towards the end of the song.

Somnuri carry on the strong style of sonic and genre experimentation for the rest of the album with an album that always feels “forward-thinking” and allowing the band to be taken on their own hard-hitting creative terms, themes and ideas.

Other great songs to listen to are: Beyond Your Last Breath, Watch The Lights Go Out and the brilliant title song - Nefarious Wave.

Somnuri have a few tricks up their sleeve on this album and you will be surprised when you hear a genre of music that comes out of nowhere. Some heavy thrash and harsh violent growls await for you on this record. Nefarious Wave is a challenging album to listen to at first but after you experience the album you can spend more time listening to the many different ideas running throughout the album.

Nefarious Wave is a first-rate album which is backed up by wonderful production values. The whole album is quite an adventure and Somnuri deserve credit for expanding their sound for the better when compared to their debut album. This is another “Album Of The Year” contender for myself and I can’t recommend it highly enough.