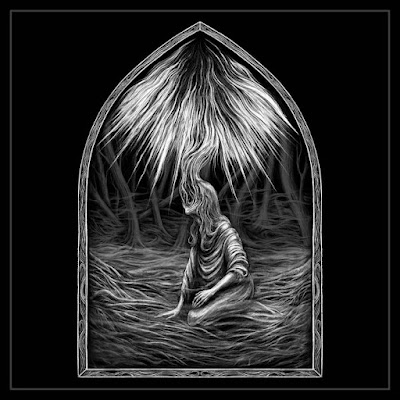 Blackened Doom Metal Unit Ghorot don’t “FUCK AROUND” on their new album Loss Of Light. A record that takes a “No Holds Barred” approach with Ghorot flirting between the different darkness levels and density themes of Doom/Sludge Metal. The vocals are pitch-black “DOOM METAL” as the riffs themselves with Ghorot telling a bleak tale over 6 songs for over 40 minutes or so.

Opening song - Harbinger - opens with an ice-cold and almost Ambient/Drone sound before bringing a Psychedelic Classic Doom style of music with some interesting musical choices and bang-on guitar solos. The vocals come drifting in and bring a more “extreme” vibe to the album. However, Ghorot still retains a platform that allows them to play classic Heavy Rock guitar solos. So there are still echoes of light within Ghorot’s dark world but it soon delves further into almost Post-Black Metal territory.

Second song - Charioteer Of Fire - starts off as a Post-Doom/Post-Rock song with twinges of Psychedelic sounds and a Spaced Out Flow. This song moves slowly to the extreme side of Blackened Doom/Sludge Metal. This is a varied and interesting journey Ghorot takes before the extreme parts of the song appear and I enjoyed the Post-Rock/Post-Metal aspects of this song the most. This is an epic song running slightly past the 11 minutes mark. The vocals don’t appear towards the later stages of the song but the “Sonic Experimental” style of this song was one of my favourite parts of the whole album. There is still a sense of “foreboding DOOM” from the very start and Ghorot does a damn fine job holding the different styles of music together and no doubt offering the best track on the whole album. If you’re a fan of THOU and YOB then this song wants to have a word with you.

Third song - Woven Furnace - is a more straight-forward song for Ghorot to get down with. Shades of early-Black Sabbath are given a Blackened Doom/Sludge Metal makeover with a gloomy Punk Rock aesthetic that makes this one of the riffiest and addictive tracks on the record. Expect the unexpected with Ghorot. As you feel you have them all figured out and they surprise you once again. None so much with this song. As this song feels like “Rock And Roll Excess” but the extreme approach still makes this a very dangerous and aggressive song to listen to.

Ghorot went “ALL OUT METAL” with the final two songs on the record - Dead Gods and In Endless Grief. Two songs forging once again different levels of Doom Metal and Sludge Metal but with a Psychedelic Metal and Cosmic Progressive outlook allowing Ghorot perhaps play the heaviest and boldest parts of the album.

Loss Of Light is without doubt one of the most engaging albums I’ve heard from the more extreme side of Doom/Sludge Metal. This is a thrilling spectacle of different styles of Metal that ultimately pulls no punches but still allows dedicated followers of the scene and casual fans to be entertained brilliantly throughout the 40 minute plus running time.

Overall, this is a must have album. End Of Discussion.

Thanks to the various folks who sent me this album to review.

Loss Of Light is available to buy on the following formats and record labels below: