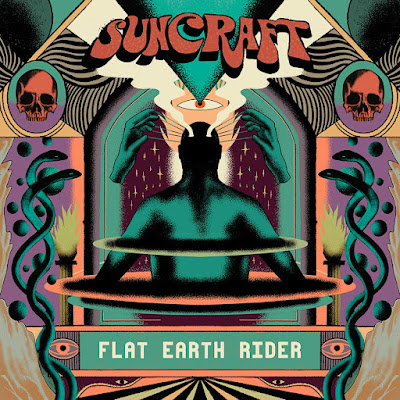 Psych Doom/Stoner Rockers have been making a name for themselves in their home territory of Norway. It’s hard not to see why with their debut full length album Flat Earth Rider. An album that touches upon themes of greed, alienation, loneliness and spirituality, reflecting upon conundrums of contemporary life. Well according to the Press Release that came with the promo.

I wasn’t in the mood to be taught or hear about modern world issues with a Doom/Stoner Metal tone but I was pleasantly surprised by this album in a great way. Flat Earth Rider is a refreshing change by merging modern Doom/Stoner Metal grooves and complex issues that we’ve all faced during this pandemic. Sounding like an off-shoot between The Sword, Mos Generator and ELDER, these guys show a deep love and respect for other musical genres which they bring with them to this album.

Opening song - Flat Earth Rider - gets straight down to business with fast-paced riffs and the band showing a Classic Hard Rock appreciation that does remind me of Mos Generator including the excellent vocals from Rasmus. The lyrics have a slight air or modern life rebellion to them and at least the band carry on with their hard-hitting message before treating the audience to non-stop Psych Doom/Stoner Metal fast-paced guitars.

Second song - Space Buddha - takes things on a more cosmic route. Yeah the mood is quite gloomy with the lyrics but Suncraft still keep the overall flow of the album quite upbeat and they’re having a ball on this song. With the song moving from 70s Hard Rock, 90s Stoner Metal and modern-day fast-paced Doom Rock. The vocals are bouncy and even quite aggressive but become soft-natured when the twin-vocal melodies appear.

Third song - Lingo Hive Mind - is full on Stoner Metal with a slight alternative twist with the funky beats that appear courtesy of top-notch Bass playing from Rasmus. The song is one of the most complex offerings on the album with the band moving so quickly through the different sounds that it’s hard to keep up at times but the whole wild psychedelic and abrasive nature of this song make this one of the standout tracks on the album.

Fourth song - Commie Cannibals - is Suncraft going full throttle here with some of the heaviest sounds, aggressive vocals and hard-hitting lyrics found on the entire album. It’s quite interesting to hear at first. As the band bring an 80s Alt Rock atmosphere to the party but the next moment it springs into full on “Apocalyptic Cosmic Doom Metal”.  An excellent mix of “Doom-Pop” vocal melodies and bone-crunching Doom/Stoner Metal riffs.

The final two songs Adoption and Bridges To Nowhere are more of the same highly effective use of Doom/Stoner Metal with Prog Rock tendencies within the final song Bridges To Nowhere being another of the standout songs on the record.

Flat Earth Rider is a multi-layered album and shows Suncraft has a lot to say about the current state of global affairs. The real victory is how Suncraft used the Doom/Stoner Metal genres to spread that message. This album quickly builds up to one of the most aggresisve, addictive and warm-hearted records of the year.

Thanks to Viral Propaganda for the promo.

Flat Earth Rider is available to buy on DD/Vinyl from All Good Clean Records from August 06th 2021.