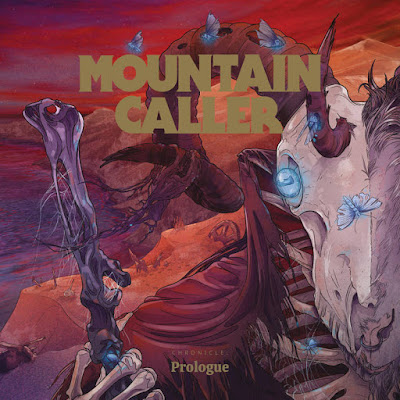 1.Something Stirred From Beneath The Rubble 09:02

3.Stripped Of All But Purpose

Instrumental Prog Doom Rockers Mountain Caller return with their new EP - Chronicle: Prologue, which acts as both follow-up and prequel to their wonderfully diverse and acclaimed debut release Chronicle 1: The Truthseeker.

This EP features similar themes, ideas and sounds from their debut album but has more than enough variety to see the band moving their sound even further with a more haunting Psychedelic score within the EP's almost 20 minute running time. The 3 tracks on show offer a lot of emotional depth with Mountain Caller playing between the many levels of Doom Metal, Post-Rock and Post-Metal with shades of Pelican and Pallbearer being some of the influences that I heard. I could also detect a slight influence from much missed Doom/Sludge Metallers - Fall Of Efrafa but that could be myself looking too much into things.

Opening song - Something Stirred From Beneath The Rubble - starts slowly with a mellow Post-Doon/Post-Rock groove before a heavier sludgy Post-Metal drive appears and Mountain Caller return to the powerful riffs they created on their debut album. This track is the standout track with it running for more than 9 minutes and I’m totally down with the Psychedelic and Post-Whatever tempo changes the band have used for this song. A real clever use of musical dynamics at play with the song both being beautifully played and frantically heavy at the same time.

The other two songs Beyond This Black Horizon and Stripped Of All But Purpose maybe aren’t as powerful as the opening but are still two superb examples of fantastic musicianship from Mountain Caller and even bring their own powerful heavy thrills and grooves along the way.

This EP consists of some of the earliest material written by Mountain Caller and it does show in places. However, this record is still a welcome addition to the The TruthSeeker story that Mountain Caller crafted so brilliantly on their debut album.

Chronicle: Prologue has got serious involvement from the Post-Metal community with Cult Of Luna’s Magnus Lindberg pulling mastering duties on this EP. And with Joe Clayton back producing once again, this EP sounds as fresh and exciting as what came before it.

Thanks to Simon at For The Lost for the promo. Chronicle: Prologue will be available to buy on Vinyl/DD through New Heavy Sounds from July 9th 2021.