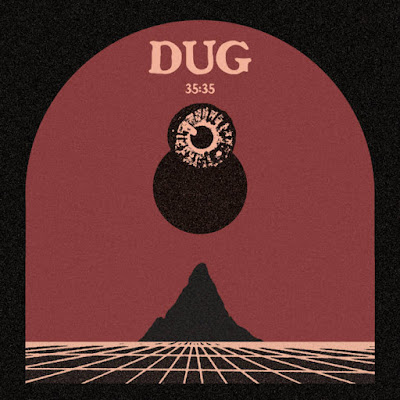 DUG debut self-titled album is one very weird and highly experimental album. Taking a Drone/Doom/Sludge Metal approach with their music but with a heavy slab of NOISE ROCK dictating most of the action. This record is quite confusing when you first listen to the album with the opening track - The Crying Man - offering almost 7 minutes of Melvins based Sludge Metal and theatrical Noise Rock grooves. DUG refuses to play by genre rules and conventions which makes this album such a heavy distorted joy. There are some “TORCHE” based Doom/Stoner Metal themes on this track but played at a much slower pace.

DUG are a Drums and Bass duo with the lack of guitar not holding the band back at all and they excel in creating almost nightmarish grooves with vocals only appearing on half of the album. DUG add creepy sound effects and noises to get their story across within the 35 minute plus running time. Tracks such as Elevator Into The Ground and Strapped To The Hood Of A Car are the more aggressive songs held on the album with DUG playing more distorted levels of Sludge/Doom Metal with some psychedelic touches along the way.

This isn’t the happiest of records and it’s one that won’t appeal to everyone but I loved DUG’s thrilling style of Distorted based Noise Rock/Sludge Metal. The album ends the way it started with the final track Loss allowing DUG the opportunity to play even bleaker slabs of music that make you wonder when will be the next time you will be listening to this record.

Though, I was surprised at myself how it does have an addictive quality within the distorted themes running throughout the album. The production is handled superbly well and DUG do play some great riffs along the way. Just be prepared for a LOUD WALL OF NOISY FEEDBACK.