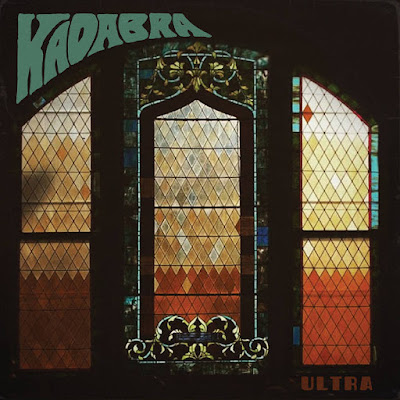 Kadabra haven’t done too badly for themselves with their debut album Ultra. Signed to Heavy Psych Sounds Records and showing the Doom/Stoner Rock world there’s a new kid on the block especially if you dig bands such as All Them Witches, Dead Meadow and dare I say early shades of both Kadavar and Uncle Acid.

Ultra showcases the band’s gloriously heavy retro style of Doom Metal, Fuzz, Psych, Stoner Rock and Classic Rock though the one thing the album impresses the most for myself is how soulful it actually is. This album has a “SOULFUL” presence with all the songs.

The seven songs held on the record have excellent grooves and lyrics that allow Kadabra to be fantastic storytellers even if they’re inspired by an “Occult Rock” style of gloomy Doom based themes. There is a heavy amount of Psychedelic Amplifier Worship going on with this record especially on the opening two tracks - Graveyard and Faded Black. The soaring grooves and melodies just draw you in with the band’s adventurous sound and pulsating 70s Blues Rock vocals.

I was expecting a more upbeat “POPPIER” sound before listening to this album. I don’t know why but I thought Kadabra would lean on the lighter side of 60s and 70s Hard Rock but these guys revel in the darker and gloomier side of that era. The band excel in playing at LOUD VOLUMES of different styles of Doom/Stoner Rock but still challenging themselves along the way.

Songs such as Eagle 20’s, Bean King and Death only see Kadabra bring heavier ideas to the party and perhaps even bring a more Sludgy attitude when you least expect it. The songs may have similar themes but each song has it’s own wicked identity to stand on it’s own merits.

If you love “FUZZ ROCK” then Kadabra bring “Truckfighters” style heaviness and fast-paced aggression to the later stages of the record. Check out Coyote and Settle Me great examples of this.

The instrumental work is superb from everyone playing their in part in bringing this highly majestic album to life. The excellent production values helps Ultra being dynamite entertainment and sounding like a “Classic Rock” album whilst offering a thrilling Modern based vibe as well.

Ultra is a must have record and another top-notch release from one of the best underground labels out there.

Ultra will be available to buy on CD/DD/Vinyl via Heavy Psych Sounds from September 17th 2021.