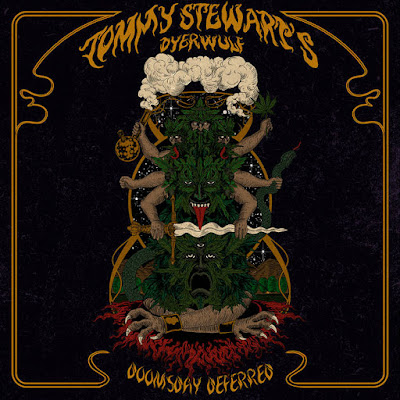 6.Not Prey to Yourself

9.Why the Rotting Sun Speaks in Tongues

Doomsday Deferred is the 2nd album from Tommy Stewart’s Dyerwulf project and is quite different to the last project that I reviewed for Negative Wall. Dyerwulf is more Atmospheric Doom Metal spliced with modern day Stoner Metal with flashes of Psych Rock and Fuzz Rock. The album is quite gloomy with a heavy amount of FUZZ leading the way. The album does have a fair amount of Amplifier Worship which is to be expected for a two piece band I believe though Dyerwulf do have special guest appearances along the way.

There is a deep love for 70s Doom Metal, Hard Rock and Heavy Metal with Black Sabbath, Trouble and Saint Vitus being the most obvious starting points especially on the excellent earliest tracks such as Shadow In The Well and Two Trog Yomp laying down the groundwork for Dyerwulf to get their “DOOM CLAWS” into whoever listens to this album.

The vocal arrangements on the album are good and show a different side to Tommy and I can even hear shades of Ozzy and King Buzzo in equal measure throughout the album. The music is always on the right side of Doom/Stoner Metal HEAVINESS with an aggressive sound and attitude to match.

Bass Players throughout the Doom/Stoner Metal land will ultimately love this album the most. As this is a Drum and Bass Two Piece combo that utilizes everything great about the Bass Guitar. The riffs are LOUD, FREAKY and PLENTIFUL.

Doomsday Deferred is perhaps the most entertaining album I’ve heard from Tommy Stewart’s weird and wonderful musical mind. As I dig the Black Sabbath vibes and The Melvins sludgy weirdo rock/metal that is held on this album but Dyerwulf still brings their own flavour and identity to the party.

Check this great album out yourself with this cool exclusive album premiere.

Tommy says this about the album:

“The creation of this album took place during a dark time for me, the same dark and precarious year or so many of us had to endure in the 2020 times. Writing and recording this album has its freewheeling moments but was also a catharsis of the dim, gloomy, and sometimes angry era. These sessions helped me break through the loneliness of isolation that I’m sure many of you could find relatable. ‘Doomsday Deferred’ shares my personal journey from dark to light with you.”

Thanks to C Squared Music for all of the details

Doomsday Deferred will be available to buy on CD/DD/Cassette/Vinyl via Black Doomba Records from September 3rd 2021.