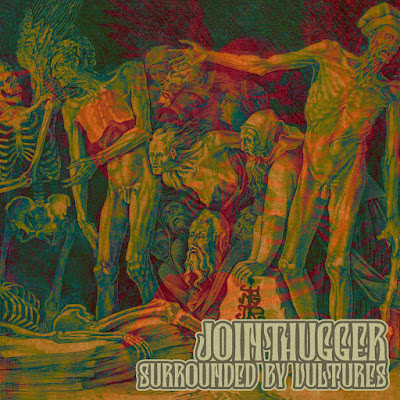 Heavy Psych Doom/Stoner Rockers JOINTHUGGER have come storming back with their 2nd album Surrounded By Vultures. A more expansive sound compared to their previous releases with the band focusing more upon sonic exploration that evokes memories of SLEEP and MONOLORD. Maybe not as distorted as two bands but JOINTHUGGER still manages to play a more daring style of Progressive based Doom/Stoner Metal that soon goes into the 70’s Doom Rock and modern day Psychedelic territories.

Opening song In One Need Of Fire Ch. 2 is an instrumental heavy take on modern day Psych Doom/Stoner Rock with heavy flashy guitars with a little sense of distortion and sludgy grooves. The song feels like it has a beginning, middle and end with JOINTHUGGER bringing some wild ideas to the party. There is also a YOB quality and feel to the heavier Psychedelic parts but this is mostly JOINTHUGGER playing a thrilling sound that becomes quite FREAKY and OUT THERE towards the end of the song.

Second song Midnight is the longest track on the album, lasting nearly 10:30 minutes. It’s a sprawling piece of Psychedelic Doom Metal with the Stoner Rock influence dialled back a bit and the band sound more dangerous on this track with a Sabbathian and Uncle Acid influence being calmly added to the more sombre moments. The song does take time for JOINTHUGGER to fully come into their own sound but when everything hits just right this becomes one of the best songs on the record. Excellent and different vocal styles bring a flash of 60s and 70s classic hard rock that actually works with the modern day Sludgy elements that’s bursting to come out to play from the backdrop that’s holding everything together.

The album takes more creative spins and turns for the better on third track Empty Space with JOINTHUGGER changing musical direction yet again with the heavy Stoner based guitars dictating the action with the band delivering  a great style of both Classic and Modern based Psychedelic sounds. JOINTHUGGER have played this style to great effect on their previous releases but it’s with this song where everything feels right and the band feel like a more powerful creative unit.

The final two songs Delysid Rex and The Calm offer seventeen minutes of Psychedelic and Trippy vibes, perhaps becoming one the best things that JOINTHUGGER actually adds to their overall sound.

Everything feels self contained on this release with each song having a different story to tell each other.  Fantastic lyrics really add to the experience of Surrounded By Vultures by bringing a cool Spooky and Occult Rock feeling to the album. Though the standout part is the instrumental work with JOINTHUGGER proving to be one of the best upcoming Doom/Stoner Metal bands from the Norwegian Scene. They have a great outlook of blending Classic Heavy Rock grooves with the more threatening modern day riffs that’s littered throughout this record.

Surrounded By Vultures is a delicious, adventurous and dark slice of Psychedelic Doom/Stoner Rock.

Thanks to Majestic Mountain Records and Sheltered Life PR for the promo.

Surrounded By Vultures will be available to buy on CD/DD/Vinyl via Majestic Mountain Records from October 31st 2021.