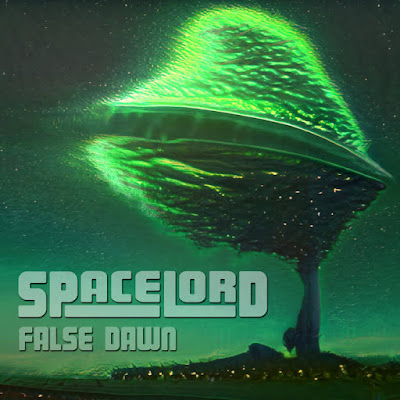 New York Psychedelic Stoner Rockers Spacelord third album False Dawn isn’t what you expect from the band with the album being more of a Blues Rock offering compared to their previous two based heavy Stoner Rock offerings. Spacelord have included Blues Rock sounds on their previous releases but it was more in the background where it’s the main focus on False Dawn. However, there are still a lot of cool Heavy Psychedelic Stoner Rock and Spaced Out interludes to keep everyone happy.

Spacelord still brings a wild 70s Hard Rock attitude on this album with False Dawn being a bold enough album to include elements from the 90s Grunge, Desert Rock and Stoner Rock scenes. With the band drawing upon their love for bands such as Black Sabbath, Alice In Chains, Soundgarden and Led Zeppelin for this album.

There is a confident Black Sabbath/Led Zeppelin swagger within the excellent opening tracks Enemy Lines and Broken Teeth Ritual with vocals from the Chris Cornell school of Grunge/Hard Rock. The tracks veer from Psych Stoner Rock to a grungier style of Blues Rock and Space Rock meeting in-between. I swear I can hear Black Sabbath classic song IRON MAN within Broken Teeth Ritual or certain elements of the song. Everything comes it’s own thing with a heavy Progressive Rock sound that’s mostly bound down to Spacelord’s creative way of Blues Rock thinking.

I’m not going in-depth with the songs like I normally do as Spacelord dictate a wild ride on this release that will instantly draw you in. If you wanted an album that brings the sounds from the bands mentioned earlier in this review then False Dawn is your album. Though I will point out my favourite songs on the album are: Broken Teeth Ritual, How The Devil Got Into You, Crypt Ghost, All Night Drive and M-60 with Spacelord playing their heaviest Blues based Stoner Rock grooves here.

If you’re a fan of the Hard Rock scene from 1970 upto the late 90s then Spacelord have captured that scene of Hard Rock on False Dawn. The record is unashamedly classic hard rock and Spacelord offers no apologies for this. The production is superbly handled by Spacelord’s very own Rich Root with the album being quite fresh from start to finish. The instrumental work is wonderful with Rich and Ed superbly paying homage to their musical heroes whilst showing what formidable musicians they are in their own right.

False Dawn is a first-rate record and you should all get on this while you can.

Thanks to Spacelord for the promo. False Dawn will be available to buy on CD/DD from November 5th 2021.