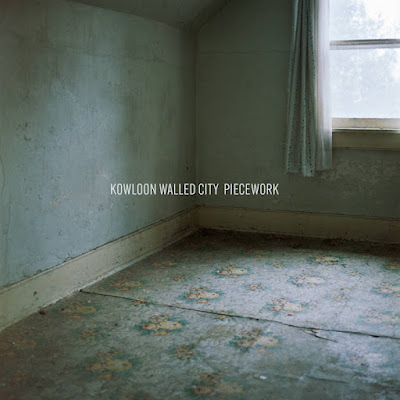 Piecework is the first album from Post-Sludge/Doom/Noise Rock Heavyweights Kowloon Walled City in six years. Maybe the pandemic delayed this album quite a bit but six years is still long by KWC standards. I thought the guys had split up or just focused on other musical projects (still hoping for another SNAILFACE record) but it seems they were biding their time for their new album.

Piecework is KWC stripped back in every way of thinking for the band. The album runs over 30 minutes in total and the long drawn out industrial Post-Doom/Sludge Metal solo are replaced by a less abrasive sound that sees the band play a more direct Sludge Rock style of music. The music is undeniably Kowloon Walled City and has a seedy undertone to it all. Ian Millar’s bass is more to the background that I originally liked but his style of playing is more powerful on this release.

Kowloon Walled City have been one of the unsung heroes of the Doom/Sludge Metal underground ever since releasing their debut material back in 2008 and Piecework doesn’t disappoint. This is just a different way of music for KWC to deliver their bleak passages whilst still remaining quite hopeful in places especially on the later stages on the record.

The opening two songs Piecework and Utopian has that deep KWC philosophical way of thinking with the emotionally charged lyrics but it’s the band’s delivery of music that fuses Post-Doom, Sludge Metal, Post-Rock and blurry Psychedelic sounds that make you take notice.

The recording process is handled once again by KWC main-man Soctt Evans and it’s one of the cleanest and perhaps emotionally charged records I’ve heard from KWC. The sound of the record is first rate with Piecework moving through the different elements of Doom Metal and Sludge Metal with the true to life Post-Hardcore shine bringing a much needed dose of reality to proceedings.

This album is quite riff-centric with KWC showing flashes of Progressive Sludge Rock/Metal on other songs such as Oxygen Tent, We Had A Plan and When We Fall Through The Floor.

If you’re a first time listener to Kowloon Walled City then Piecework is the perfect introduction or gateway to this amazing band’s body of work. From this you can check their earlier records that all show a different side to this legendary band.

Piecework may not be as heavy or as threatening as KWC’s earlier records but this is still an outstanding album that some bands would love to release themselves. Overall, Piecework is a challenging, emotionally charged and thrilling record that allows Kowloon Walled City to write a new exciting chapter for themselves.

Thanks to Lauren at Rarely Unable PR for the promo. Piecework is available to buy on CD/Vinyl from the links below: